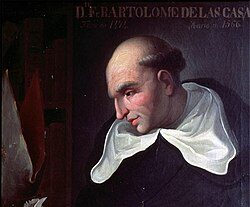 Bartolomé de Las Casas was a Dominican priest who was one of the first Spanish settlers in the New World. After participating in the conquest of Cuba, Las Casas freed his own slaves and spoke out against Spanish cruelties and injustices in the empire. He argued for the equal humanity and natural rights of the Native Americans. Las Casas worked for the conversion of Native Americans to Christianity and for their better treatment. Pope Paul III agreed and issued an edict in 1537 banning the enslavement of Native Americans. The Spanish crown also agreed and banned in the 1542 New Laws the enslavement of Native American. In 1550, the crown abolished the encomienda system, which allowed the Spanish to seize Native Americans’ lands and force their labor. In 1552, Las Casas published a shocking account of Spanish cruelties, A Very Brief Account of the Destruction of the Indies. He blamed the depopulation of the Native American populations on Spanish brutality rather than on the spread of disease. This gave rise to the Black Legend, a legend that Protestant nations such as England and the Netherlands used as propaganda to denounce the imperial system of Catholic Spain and promote their own means of settlement, which they viewed as more peaceful and benevolent.