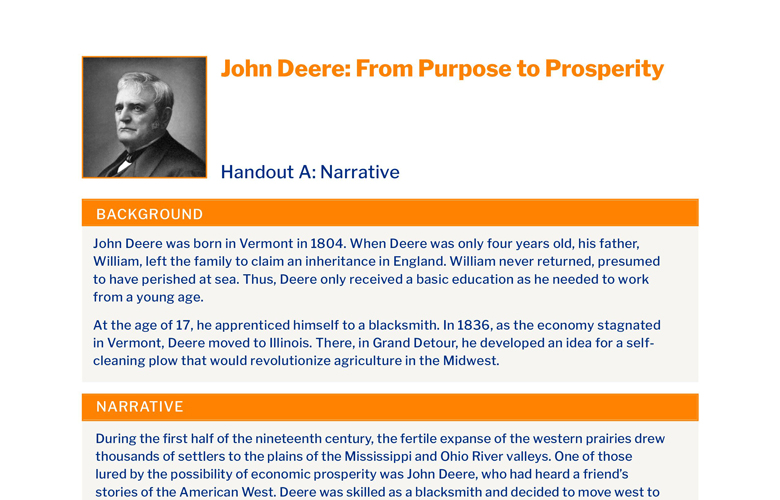 John Deere was born in Vermont in 1804. When Deere was only four years old, his father, William, left the family to claim an inheritance in England. William never returned, presumed to have perished at sea. Thus, Deere only received a basic education as he needed to work from a young age.

At the age of 17, he apprenticed himself to a blacksmith. In 1836, as the economy stagnated in Vermont, Deere moved to Illinois. There, in Grand Detour, he developed an idea for a selfcleaning plow that would revolutionize agriculture in the Midwest.

During the first half of the nineteenth century, the fertile expanse of the western prairies drew thousands of settlers to the plains of the Mississippi and Ohio River valleys. One of those lured by the possibility of economic prosperity was John Deere, who had heard a friend’s stories of the American West. Deere was skilled as a blacksmith and decided to move west to meet the growing demand for his trade. In 1836, he left his pregnant wife and four children in Vermont and made his way to Grand Detour. He immediately set up a smithy, and within a year his family joined him.

Deere played a key role in his small community. Before his arrival, no one in the area could shoe the oxen needed for plowing, and it was difficult to find new farming tools, horseshoes, knives, or silverware. In the age before mass production, such goods were made on request. Broken tools had to be discarded or taken to the nearest blacksmith for repair. When area settlements spread, and farmlands expanded, Deere’s business grew.

Deere possessed a diligent work ethic and sought to create the best products. A clerk who worked across the street from Deere’s smithy recalled, “I had heard [Deere’s] hammering in the morning, when I was in the store in bed at four o’clock, and at ten o’clock at night; he had such an indomitable determination to do and work what he had in his mind.”

Deere was especially determined to find a solution to a problem that plagued the pioneer farmers and threatened to drive many back east. Those accustomed to the drier, pebbly soil of New England were frustrated by their inability to till their new Midwestern land effectively. When farmers pushed and pulled plows through fields, they had to stop every few feet to clear clumps of soil clogging the cast-iron blades. The progress a single farmer and his team could accomplish in a day was extremely limited.

In 1837, Deere found a solution. He salvaged a broken steel saw blade, cut and molded it, and created the self-cleaning plow. Deere’s moldboard design allowed the blade to clean itself as it cut through the soil. The day he tried the plow, skeptical local farmers turned out to watch. They stood in silence as Deere walked the plow up and down a friend’s field — without stopping. According to one account, a farmer looked at the blade afterward and exclaimed,
“By cracky! She’s clean!”

Deere was still not satisfied with the product. He gave the plow to his friend, reportedly saying, “Maybe ways of improving it will occur to me.” He continued to try to refine his work, in the process building a business that would help to bring about a major agricultural revolution.

In the following years, Deere maintained his blacksmith shop and worked on the plow on the side. In 1838, he built and sold three plows. In 1839, he filled orders for 10. By 1842, he produced more than 100 plows a year and exhibited a model with the sign “Self-Polisher” in front of his shop. He began to manufacture his plows in advance and recruited farmers to help advertise his product. These salesmen, known as “travelers,” would go from town to town to sell the plows. Deere brought on a partner to expand his business and together they built a plow factory.

The two continued to use innovative business practices, such as importing rolled, polished
steel from England for the first time. They constructed the first foundry in the area; by 1846, the business was producing a thousand plows per year.

In 1847, Deere established a plow factory in Moline, Illinois, on the banks of the Mississippi
River. The location made it easy to import steel from Pittsburgh, as well as to increase his distribution range. He set up shop at local fairs, advertised in the Prairie Farmer newspaper, expanded his use of franchise dealers, and gradually became a wealthy man. By 1856,
Deere’s Moline Plow Works was the largest plow factory in the region, producing 13,000 plows a year, many of which were taken west in covered wagons.

Over time, Deere’s work ethic became the hallmark of what would become one of the most productive and successful agricultural companies in America. He embodied diligence and
customer service in his work, saying, “I will never put my name on a plow that does not have in it the best that is in me.” Deere sought to find a way to help farmers take full advantage of the open prairies of the Midwest. By achieving his purpose, the blacksmith brought prosperity to himself and his family while helping farmers across the country.