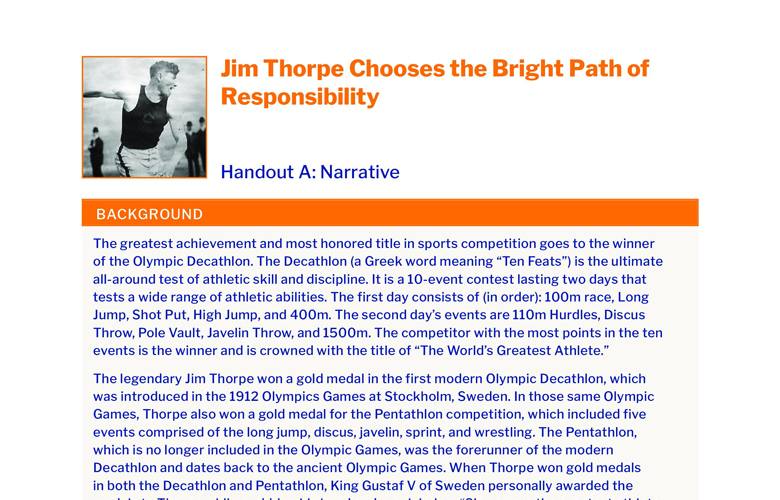 The greatest achievement and most honored title in sports competition goes to the winner of the Olympic Decathlon. The Decathlon (a Greek word meaning “Ten Feats”) is the ultimate all-around test of athletic skill and discipline. It is a 10-event contest lasting two days that tests a wide range of athletic abilities. The first day consists of (in order): 100m race, Long Jump, Shot Put, High Jump, and 400m. The second day’s events are 110m Hurdles, Discus Throw, Pole Vault, Javelin Throw, and 1500m. The competitor with the most points in the ten events is the winner and is crowned with the title of “The World’s Greatest Athlete.”

The legendary Jim Thorpe won a gold medal in the first modern Olympic Decathlon, which was introduced in the 1912 Olympics Games at Stockholm, Sweden. In those same Olympic Games, Thorpe also won a gold medal for the Pentathlon competition, which included five events comprised of the long jump, discus, javelin, sprint, and wrestling. The Pentathlon, which is no longer included in the Olympic Games, was the forerunner of the modern Decathlon and dates back to the ancient Olympic Games. When Thorpe won gold medals in both the Decathlon and Pentathlon, King Gustaf V of Sweden personally awarded the medals to Thorpe while grabbing his hand and proclaiming, “Sir, you are the greatest athlete in the world!” Throughout his life, Thorpe understood that he had a responsibility to use his abilities to help those around him.

A descendant of the famous warrior chief Black Hawk, Jim Thorpe (Native American name, Wa-tho-huck, or Bright Path) was born in rural Oklahoma on May 28, 1888. Thorpe was of Irish, Sac-Fox, Potawatomi, and Kickapoo descent. Life was difficult for Thorpe’s family and, from an early age, he was expected to be accountable for helping the family to survive by working and hunting for food. This accountability instilled in Thorpe a deep sense of responsibility to his family and community. He knew he had an obligation to use his strengths and talents to help others.

Jim Thorpe’s athletic abilities were apparent to all at an early age. He began learning to swim, hunt, trap prey, and ride horses beginning at age three. It was expected of family members to work hard and provide food for meals. All year round, Thorpe loved the outdoors. In summer and winter, he was never in the house when he could be outside. Thorpe loved the challenges of his life and recalled of his childhood, “I wasn’t content unless I was trying my skill in some game against my fellow playmates or testing my endurance and wits against some member of the animal kingdom.”

When Jim was 16, his father sent him to the Carlisle Indian Industrial School near Harrisburg, Pennsylvania and enrolled him in an apprentice program to become a tailor. Thorpe’s early days at Carlisle were marked by long bouts of truancy that spawned as a result of multiple family members dying. His twin brother, Charlie, had died at the age of nine. His mother died when Jim was an early teen and then his father died four years later, just before Thorpe left to attend school in Pennsylvania. Within a very short time, Jim had lost his connection to family and community which left him without a sense of identity.

As a 16-year-old, alone and with no sense of direction, Thorpe found himself walking across the sports field at Carlisle School. Jim saw some students practicing the high jump during a track and field practice session and asked if he could give it a try. Wearing his work clothes and not realizing that the high jump bar was set at the school record height of 5’9”, Thorpe launched himself over the bar to break the school record on the first try. When legendary coach Glenn “Pop” Warner heard about the jump, he convinced Thorpe to join the school track and field team. Thorpe soon became the star of the school’s track program.

Jim Thorpe excelled at many sports including basketball, baseball, lacrosse, swimming, archery, boxing, and tennis. He even won a national ballroom dancing contest. In the spring of 1909, Thorpe briefly left school for North Carolina to play minor league baseball. He pitched and played first base while being paid $15 per week. This pay would later tarnish his 1912 amateur Olympic status. However, it was football that would propel Thorpe to national stardom.

When Jim Thorpe began to play, football was not as popular a sport as it is today. The young man played a significant role in changing that. Starring as a halfback, placekicker, punter, and defender, he led Carlisle to a surprise victory over top-ranked Harvard in 1911. He followed up by leading the school to victory a year later against the famous West Point military academy. Carlisle earned a combined record of 23-2-1 over the 1911-1912 season while Thorpe earned the honor of being named to the All-American team.

At the 1912 Olympics in Stockholm, Sweden, Thorpe won the gold medal in both the Pentathlon and the new event called the Decathlon. When he returned to the United States, Thorpe was honored in New York with a ticker tape parade as part of a hero’s welcome back home. Shortly after, however, a newspaper reported that Thorpe had been paid to play minor league baseball, which was a violation of amateur rules. Thorpe pleaded to the Amateur Athletic Union, contending that as a young man in need of money he was unaware of any violation. Despite his contention, Thorpe was stripped of his amateur status and forced to return his gold medals.

Many people in his position would have become bitter and given up hope, but not Jim “Bright Path” Thorpe. He set his sight on new challenges. In athletics, Thorpe found a new sense of purpose and connectedness to others. He embraced the responsibility of being part of a team, understanding that living for himself alone would provide no comfort. Thorpe realized that a sense of purpose would come from being a part of something that transcended his own life. Sports taught him the virtues of hard work, sacrifice, perseverance, selflessness, and respect for authority as the price that he must pay to achieve any worthwhile goal. He re-learned the childhood lessons of responsibility to self and others.

Thorpe had gone to the Olympics in Stockholm with an additional motive besides winning a gold medal. He wanted to marry his sweetheart, Iva Miller. Her family had disapproved of the match, and Thorpe was out to prove that he was making a responsible decision and could make a good enough living at sports to support a wife. He proved his point and married Miller in 1913. He then signed to play professional baseball with the New York Giants. He played the next six years with the Giants, the Reds, and the Braves.

Jim Thorpe made an even more significant impact as a football player. He signed with the Canton Bulldogs in 1915 and was paid $250 per game. He led the Bulldogs to championship seasons in 1916, 1917, and 1919. The league was soon renamed as the organization known today as the National Football League. Thorpe served as league president for the first season and also went on to play for the NFL’s Cleveland Indians, New York Giants, and Chicago Cardinals through 1928.

With a sense of responsibility to give back to sports and to honor his Native American heritage, Jim Thorpe went on to found the Oorang Indians, an all-Native American team that also performed “war dances” and other rituals to entertain audiences. After his career in sports had concluded, Thorpe sought a career in Hollywood and was credited with appearing in more than 60 films from 1931 to 1950, mostly as small roles playing stereotypical American Indians.

Thorpe also found purpose in being responsible to his Native heritage by fighting for opportunity for Native American actors in Hollywood. He founded a casting company to pressure Hollywood studios into casting authentic Native Americans for movie roles that had previously been played only by non-Native Americans. Thorpe also used the money he made from speaking engagements to obtain original Sac and Fox tribal lands from the federal government with the goal of providing the land to tribal members for traditional use.

For Jim Thorpe, nothing in life came easily. Despite all the challenges, he chose to live up to his Native American name by choosing the “Bright Path.” He understood that his actions affected the lives of others and chose to accept the hard work and responsibility that would not only make him a success but provide leadership for others. Jim Thorpe never gave up hope and worked tirelessly for those around him. Before he died in 1953, Thorpe was the subject of a Hollywood movie titled: Jim Thorpe-All American. He was elected as a charter member of the Pro Football Hall of Fame in 1963. In 1982, his name was restored to the Olympic record books as a gold medal winner in the 1912 Olympics. He was also voted as the twentieth century’s greatest athlete in a 2000 ABC sports poll. However, the sports records alone didn’t make him a champion. Jim Thorpe will always be remembered for all the things that made him a champion—hard work, sacrifice, and a desire to make all others around him better.