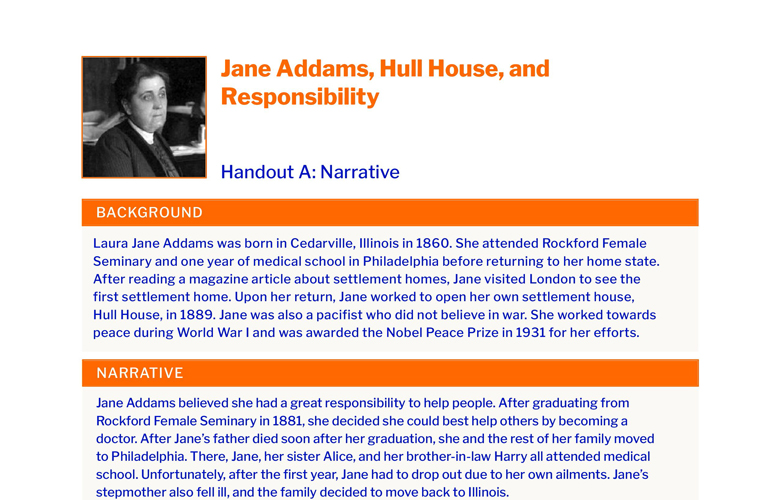 Laura Jane Addams was born in Cedarville, Illinois in 1860. She attended Rockford Female Seminary and one year of medical school in Philadelphia before returning to her home state. After reading a magazine article about settlement homes, Jane visited London to see the first settlement home. Upon her return, Jane worked to open her own settlement house, Hull House, in 1889. Jane was also a pacifist who did not believe in war. She worked towards peace during World War I and was awarded the Nobel Peace Prize in 1931 for her efforts.

Jane Addams believed she had a great responsibility to help people. After graduating from Rockford Female Seminary in 1881, she decided she could best help others by becoming a doctor. After Jane’s father died soon after her graduation, she and the rest of her family moved to Philadelphia. There, Jane, her sister Alice, and her brother-in-law Harry all attended medical school. Unfortunately, after the first year, Jane had to drop out due to her own ailments. Jane’s stepmother also fell ill, and the family decided to move back to Illinois.

Jane was depressed that she couldn’t fulfill her dream to help people, but she soon read about a new idea. Due to the high number of poor and ill in London, groups began to open settlement houses where the more affluent could help those who faced hardships get back on their feet. Jane was intrigued, and she and several friends traveled to London to see the first settlement house, Toynbee Hall, in action. When she arrived, Jane saw a combination of community, cultural, educational, and social service centers all rolled into one. She decided she wanted to open her own settlement house in the United States.

When Jane arrived back in Illinois, she and Ellen Gates Starr purchased an old mansion in Chicago called Hull House and opened their own settlement house there in 1889. The two women worked diligently to ensure that the poor of Chicago had a place with abounding opportunities, and soon the number of residents grew. Hull House provided continuing education programs, clubs, a library, an art gallery, a kitchen for the public to use, and resources to help those seeking employment. Hull House was a success and people came from all over the nation and the world to see Jane Addams’ dream.

Hull House was staffed by university educated women that would help to provide working class people with the social and educational opportunities they needed to be successful. Many of their clients were immigrants from Europe who differed greatly in language and culture than their American counterparts. Jane and her staff worked to help these people assimilate into the United States.

The research done by Hull House employees helped the rest of the nation understand the difficulties the poor faced. Research projects included sanitation, the causes of poverty, drug use, illness, housing, and other issues that plagued the working class people of the country. Hull House then disseminated their research to the nation to help inform others of the issues and advocate for changes.

As part of being responsible, Jane Addams decided to become more involved in political matters. Jane was a part of the women’s suffrage movement and promoted women’s rights. She was also a strong pacifist. Jane attended a conference in The Hague, Netherlands in 1915 to help put an end to World War I. When the United States entered the war, she founded the Women’s Peace Party with Carrie Chapman Catt. The group became the Women’s International League for Peace and Freedom, and Jane served as president for many years. For her efforts in promoting peace, Jane was awarded the Nobel Peace Prize in 1931.

Jane’s main focus in life was helping people. The success of Hull House and her involvement in women’s rights and peace helped her to fulfill that responsibility. Jane understood that her love of people could be used to make a difference in her community. She knew that her actions could have positive consequences and felt a responsibility to act.