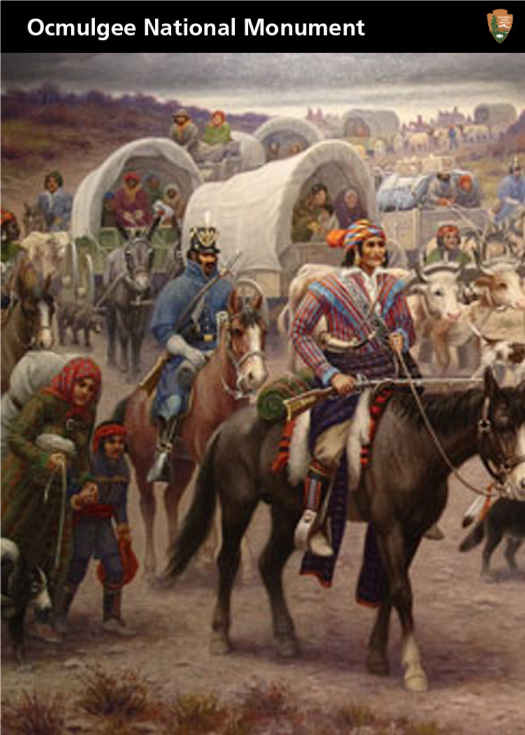 Westward expansion, and the ensuing conflict with American Indians who called these lands home, was a recurrent theme in colonial and early American history. In the early part of the 1800s, American settlers began pressuring the federal government to remove American Indians occupying the lands the settlers desired. Through military campaigns and treaties, the U.S. government slowly and sporadically began to transfer American Indians from their lands to areas west of the Mississippi River. However, by the time Andrew Jackson was elected president in 1828, thousands of American Indians still lived east of the Mississippi River. The Cherokee, Chickasaw, Choctaw, Creek, and Seminole tribes (collectively known as the Five Civilized Tribes) made up most of this remaining population. Part of their success in keeping their lands was due to their adoption of some American cultural and political values. Despite their attempts at assimilation, the Five Civilized Tribes ultimately suffered the same fate as other Indian tribes.

As president, Jackson pushed for a removal policy that would move all remaining American Indians west of the Mississippi. As a result, Congress passed the Indian Removal Act in 1830. In 1836, a small Cherokee faction signed the Treaty of New Echota, which ceded all the tribes’ land in exchange for a reservation in modern day Oklahoma. In response, Cherokee chief John Ross submitted his Memorial and Protest of the Cherokee Nation to Congress to declare the Treaty of New Echota void.

Source B: Chief John Ross’ Memorial and Protest to Congress, 1836

The consequences of a speedy removal will be important to the United States, to individual states, and to the Indians themselves. . . .

Humanity has often wept over the fate of the aborigines of this country, and philanthropy has been long busily employed in devising means to avert it, but its progress has never for a moment been arrested, and one by one have many powerful tribes disappeared from the earth. . . . Philanthropy could not wish to see this continent restored to the condition in which it was found by our forefathers. What good man would prefer a country covered with forests and ranged by a few thousand savages to our extensive republic, studded with cities, towns, and prosperous farms, embellished with all the improvements which art can devise or industry execute, occupied by more than 12,000,000 happy people, and filled with all the blessings of liberty, civilization, and religion? . . .

. . . Rightly considered, the policy of the general government toward the red man is not only liberal, but generous. He is unwilling to submit to the laws of the states and mingle with their population. To save him from this alternative, or perhaps utter annihilation, the general government kindly offers him a new home, and proposes to pay the whole expense of his removal and settlement.

Do you agree with Jackson that the Indian Removal Policy was a generous act toward the American Indian tribes? Explain your answer.

2. In his message to Congress, Chief John Ross stated the Cherokee people made rapid advances in civilization, morals, and culture by mimicking American citizens. What do you think constitutes the definition of a “civilized people”?

Memorial and Protest of the Cherokee Nation (Source B) http://www.digitalhistory.uh.edu/active_learning/explorations/indian_removal/ross2.cfm