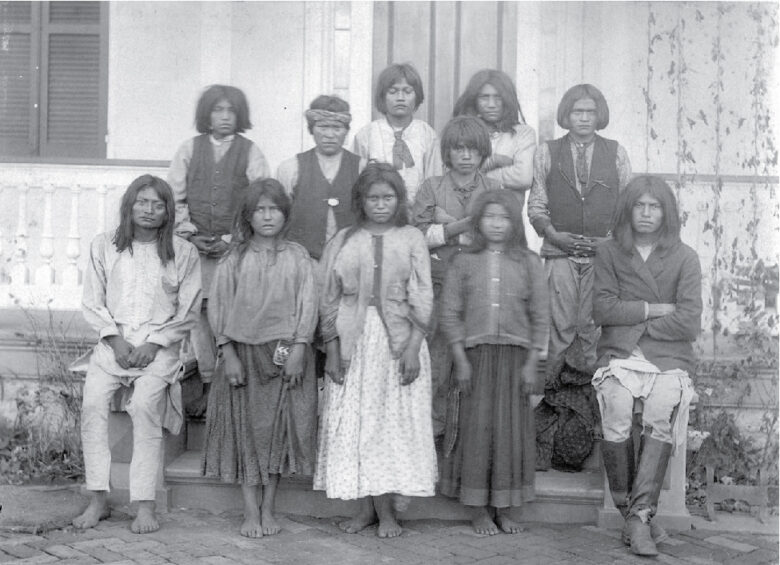 After the Civil War, people headed west beyond the Mississippi River by the millions. As they moved, they encountered diverse American Indian groups who had lived in these regions for generations. Some were members of eastern tribes such as the Cherokee or Creeks who had been forcibly resettled, whereas other tribes had always lived in the West. As the numbers of Anglo-American migrants increased, so did violence with American Indian groups who saw these settlers as encroachers on their land. In addition, U.S. military victories and the passage of the Dawes Act in 1887 severely weakened American Indian resistance to the increasing number of Anglo-American settlers. In the 1880s, the federal government adopted a policy of assimilation of American Indians by focusing on educating the youth. The Carlisle Indian School in Pennsylvania, founded by Captain Richard Henry Pratt in 1879, was created with the goal of assimilating American Indian youth through education. Pratt subscribed to the principle “kill the Indian [in him] and save the man.” At Carlisle, young boys and girls were subjected to a complete transformation. If they exhibited any “Indian behaviors,” they were punished. “Before” and “after” photographs were used as proof of the success of the Carlisle model. Study the “before” and “after” photographs before answering the questions that follow.

Figure 1: Eleven Apache boys and girls pose outside the Carlisle Indian School after their arrival in 1886.

Figure 2: The caption above the boys and girls reads, “Chiricahua Apaches Four Months After Arriving at Carlisle” and lists their names underneath.