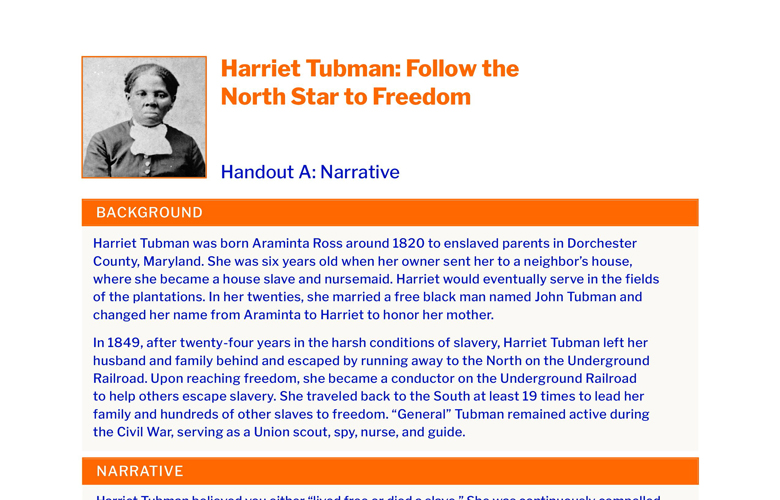 Harriet Tubman was born Araminta Ross around 1820 to enslaved parents in Dorchester County, Maryland. She was six years old when her owner sent her to a neighbor’s house, where she worked in the home as a nursemaid. Harriet would eventually serve in the fields of the plantations. In her twenties, she married a free black man named John Tubman and changed her name from Araminta to Harriet to honor her mother.

In 1849, after twenty-four years in the harsh conditions of slavery, Harriet Tubman left her husband and family behind and escaped by running away to the North on the Underground Railroad. Upon reaching freedom, she became a conductor on the Underground Railroad to help others escape enslavement. She traveled back to the South at least 19 times to lead her family and hundreds of other slaves to freedom. “General” Tubman remained active during the Civil War, serving as a Union scout, spy, nurse, and guide.

Harriet Tubman believed you either “lived free or died a slave.” She was continuously compelled to help others, whether they were family, friends, or strangers. Tubman was a champion in the abolitionist movement, and even those who only knew of her through stories of her heroism trusted her. She felt a responsibility to other enslaved peoples and to the people that helped her safely remove slaves from the South.

Harriet lived a laborious life full of physical punishment that left permanent scars. When she was 12, she was sent on an errand to a store by her master. At the store, a man insisted that Harriet restrain an enslaved boy who was attempting to run away. When she refused, the man threw a two-pound weight that hit her on the head. Harriet did not receive proper medical treatment for the injury and never fully recovered from the damage. She continued to live with seizures and headaches for the rest of her life. These scars would remind her of her horrid life as an enslaved woman and would be the catalyst to drive Harriet to run from bondage in 1849.

After Harriet made her own escape, she decided to return to the South to help others leave the cruelties of slavery. Abolitionists, who vehemently opposed slavery, helped Harriet on her journeys with a circuit of safe houses called the Underground Railroad. Quakers and other abolitionists allowed runaway slaves to stay overnight in hiding places behind bookcases or in false-bottom carriages. They used signals to notify escapees whether they could safely stop at their station or if they should continue to another station.

For eight years, Harriet made trips back to Maryland to rescue family and close friends. She would dress up in disguises to avoid being captured. Harriet had to overcome many obstacles to make the journeys. On each trip, Harriet walked for seven weeks and covered nearly ninety miles to Philadelphia, Pennsylvania, where she would find work and save money to make the trip back south to save others. Harriet walked by night and rested during the day so as not to be detected by the bloodhound dogs that searched for runaway slaves.

Every time she returned south to rescue another group, she feared for her own safety as well as the safety of the travelers with her. Strength, courage, determination, and a sense of responsibility enabled her to face the constant dangers. In 1865, she said, “I prayed to God to make me strong and able to fight, and that’s what I’ve always prayed for ever since.” She knew that every step forward put the nightmare of enslavement behind those she helped.

To make matters worse, the government enacted a stricter Fugitive Slave Act in 1850 that stated all runaway slaves in the North had to be returned. Additionally, those who helped the enslaved escape would be heavily fined. Newspapers described the runaways and offered monetary rewards. Harriet remained steadfast and continued to help slaves escape. She rerouted her legs of the Underground Railroad to Canada so that the escaped slaves would not be recaptured in states where the Fugitive Slave Act held authority. She was able to lead her sister, brothers, niece, and countless others to freedom. She was never caught and never lost an escaped enslaved person.

After the war and the end of slavery, Mrs. Tubman continued to feel responsible for others. She purchased land from William Seward, former Secretary of State under President Lincoln, in order to open the Home for the Aged in Auburn, New York. When she was too old and ill to run the home anymore, she deeded the property to officials of the Church of Zion, who continued to run it. At the end of her life, Harriet herself moved into the home to live out her final days. Harriet Tubman never lost sight of her conviction that she was responsible to do as much good as she could for as long as possible.