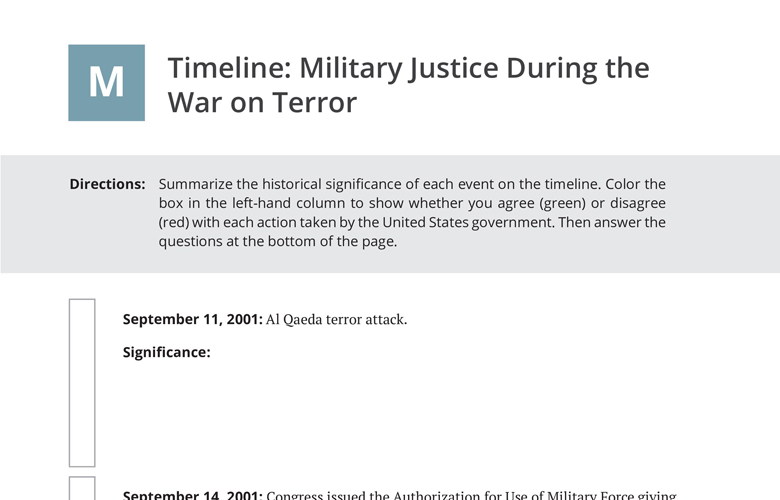 Handout M: Timeline – Military Justice During the War on Terror

Directions: Summarize the historical significance of each event on the timeline. Color the box in the left-hand column to show whether you agree (green) or disagree (red) with each action taken by the United States government. Then answer the questions at the bottom of the page.

November 13, 2001: President Bush issued a Military Order authorizing trial by military commission for suspected terrorists and specifying that they would have no recourse to the U.S. court system for appeals.

November 2004: Military commission hearings began; among the first to be tried was Salim Ahmed Hamdan.

December 30, 2005: Detainee Treatment Act revoked all federal district judges’ jurisdiction over habeas claims and allowed the Court of Appeals for the District of Columbia Circuit to hear appeals of final decisions of military commissions.

October 17, 2006: Military Commissions Act established procedural rules based on, but different in important ways from, UCMJ; stripped federal judiciary of all habeas jurisdiction in detainee cases, including cases pending at that time. At the president’s request, this law invalidated parts of the Hamdan decision.

August 7, 2008: In his retrial based on the 2006 MCA, Salim Hamdan was acquitted of the charge of conspiracy, but found guilty of one count of providing material support for terrorism. He was credited with 5 years’ time served.

January 20, 2009: President Barack Obama took office and halted military commission hearings to conduct an investigation of the detainee cases. He issued an Executive Order that the detention facility at Guantanamo be shut down within a year. Officials were ordered to assess whether each Guantanamo detainee should continue to be held by the United States, be transferred or released to another country, or be prosecuted in the U.S. for criminal offenses.

June 9, 2009: Detainee Ahmed Ghailani was transferred from Guantanamo to New York federal district court for trial on terror charges. He was ultimately convicted and sentenced to life in prison.

July 20, 2009: President Obama’s Detention Policy Task Force reported that military commissions are appropriate for some detainees. Disposition of each case was assigned to a team including Department of Justice and Department of Defense personnel.

November 13, 2009: Attorney General Eric Holder announced a plan to try five high value detainees (including 9/11 “mastermind” Khalid Sheikh Mohammad) in New York City federal court. This was halted due to objections related to security concerns and debate about what level of due process protection is appropriate for terror suspects captured in wartime.

January 2010: Deadline for closure of Guantanamo detention facility was not met. The Obama administration determined that about 50 of the detainees would continue to be held there without trial, 40 would be prosecuted in military commissions or federal court, and the remaining 110 would be released when a receiving country could be identified.

January 7, 2011: Congress prohibited the use of Defense Department funds to transfer detainees from Guantanamo Bay to the U.S. or to other countries, effectively eliminating any chance of trial in civilian court for Guantanamo detainees.

October 16, 2012: D.C. Circuit Court of Appeals overturned the Hamdan conviction, explaining that “material support for terrorism” was not a crime at the time the events for which he was prosecuted under the 2006 Military Commissions Act took place. This decision cast more doubt on the constitutionality of the military commissions trial system for 9/11 terror suspects.

December 9, 2014: Senate Intelligence Committee released its report on the Central Intelligence Agency’s enhanced interrogation techniques. The report showed, among other facts, that KSM was waterboarded repeatedly. Waterboarding is a procedure in which simulated drowning is used to persuade suspects to provide information. The CIA defended such practices as effective in acquiring important intelligence from suspects. Critics called the practice torture and claimed that it did not produce accurate information.