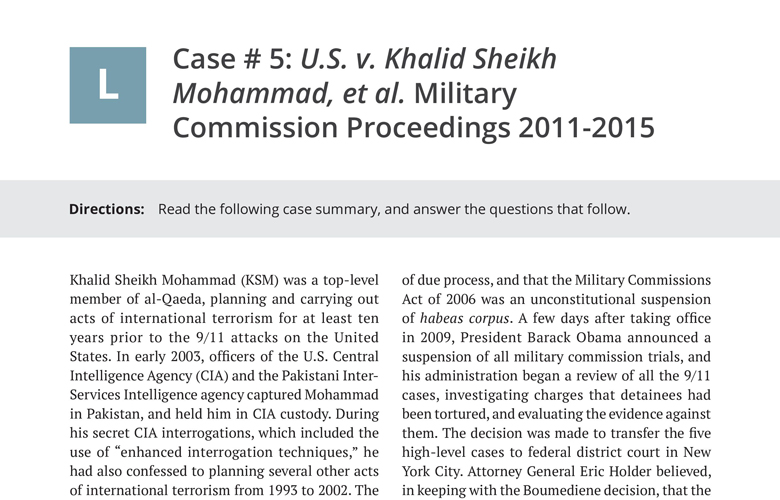 Directions: Read the following case summary, and answer the questions that follow.

Khalid Sheikh Mohammad (KSM) was a top-level member of al-Qaeda, planning and carrying out acts of international terrorism for at least ten years prior to the 9/11 attacks on the United States. In early 2003, officers of the U.S. Central Intelligence Agency (CIA) and the Pakistani Inter-Services Intelligence agency captured Mohammad in Pakistan, and held him in CIA custody. During his secret CIA interrogations, which included the use of “enhanced interrogation techniques,” he had also confessed to planning several other acts of international terrorism from 1993 to 2002. The interrogation techniques included such practices as waterboarding (simulated drowning), sleep deprivation, prolonged stress positions, extreme cold, deafening noise, beating, and others. In 2006, the U.S. military took charge of Mohammad, moving him and four other high-level 9/11 co-conspirators to the Guantanamo detention facility. In March 2007, Mohammad admitted in a closed-door hearing, “I was responsible for the 9/11 operation, from A to Z.”

In 2008, Mohammad and the other four high-level terror suspects were formally charged under the Military Commissions Act of 2006 with murder, terrorism and other war crimes related to the 9/11 attacks. The Guantanamo military commission proceedings began in a specially constructed, well-secured courtroom with arraignment of the suspects in June, 2008. On June 12, 2008, the Supreme Court ruled in Boumediene v. Bush, that enemy combatants detained at Guantanamo Bay were entitled to the Fifth Amendment’s protection of due process, and that the Military Commissions Act of 2006 was an unconstitutional suspension of habeas corpus. A few days after taking office in 2009, President Barack Obama announced a suspension of all military commission trials, and his administration began a review of all the 9/11 cases, investigating charges that detainees had been tortured, and evaluating the evidence against them. The decision was made to transfer the five high-level cases to federal district court in New York City. Attorney General Eric Holder believed, in keeping with the Boumediene decision, that the federal court system provided the best avenue to try the cases of KSM and his co-conspirators, and that the trials could be conducted with sufficient provision of security safeguards. The plan for a New York trial of the five cases met significant obstacles, however. Many people opposed extending Bill of Rights protections to suspected terrorists, and the projected costs of making the New York courtroom meet security standards skyrocketed.

In January 2011, Congress prohibited the use of Defense Department funds to transfer any defendant from Guantanamo to the U.S., effectively barring any possibility of Guantanamo detainees receiving any trial other than by military commission. That April, Attorney General Holder announced that the cases of Mohammad and the other four accused conspirators would be heard by military commissions at Guantanamo, and as of 2015, preparation for those trials is ongoing. In 2014 the U.S. Senate Intelligence Committee reported that its investigation of millions of CIA internal records showed extensive use of “enhanced interrogation techniques” in the questioning of terror suspects held in Guantanamo and other prisons. Debates continue about the due process protections to be carried out with terror suspects captured during wartime, whether military commission hearings can be conducted in a way that meets constitutional requirements, and which branch of government is best qualified to answer those questions. The debates raise questions not only about due process and fair trial issues, but also about the Constitution’s complex system of separation of powers.