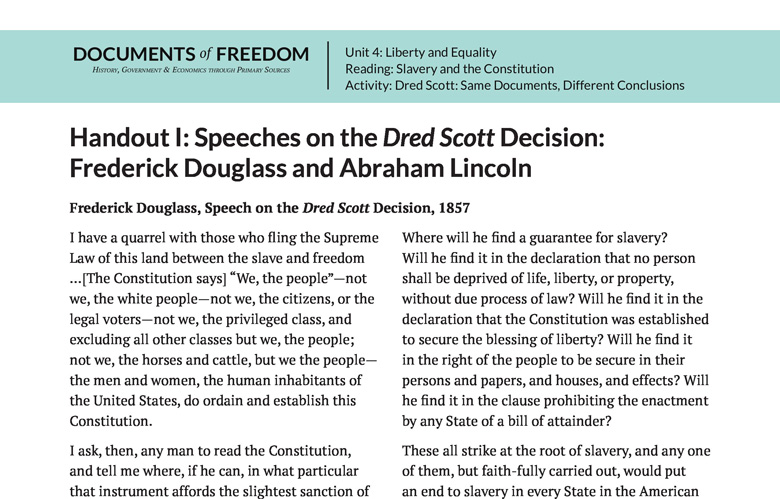 Handout I: Speeches on the Dred Scott Decision: Frederick Douglass and Abraham Lincoln

I have a quarrel with those who fling the Supreme Law of this land between the slave and freedom …[The Constitution says] “We, the people”—not we, the white people—not we, the citizens, or the legal voters—not we, the privileged class, and excluding all other classes but we, the people; not we, the horses and cattle, but we the people— the men and women, the human inhabitants of the United States, do ordain and establish this Constitution.

I ask, then, any man to read the Constitution, and tell me where, if he can, in what particular that instrument affords the slightest sanction of slavery?

These all strike at the root of slavery, and any one of them, but faith-fully carried out, would put an end to slavery in every State in the American Union.

Chief Justice Taney, in delivering the opinion of the majority of the Court, insists at great length that Negroes were no part of the people who made, or for whom was made, the Declaration of Independence, or the Constitution of the United States. …[T]he Chief Justice does not directly assert, but plainly assumes, as a fact, that the public estimate of the black man is more favorable now than it was in the days of the Revolution. This assumption is a mistake. … In those days, our Declaration of Independence was held sacred by all, and thought to include all; but now, to aid in making the bondage of the Negro universal and eternal, it is assailed, and sneered at, and construed, and hawked at, and torn, till, if its framers could rise from their graves, they could not at all recognize it. …I had thought the Declaration contemplated the progressive improvement in the condition of all men everywhere; but no, it merely “was adopted for the purpose of justifying the colonists in the eyes of the civilized world in withdrawing their allegiance from the British crown, and dissolving their connection with the mother country.” Why, that object having been effected some eighty years ago, the Declaration is of no practical use now—mere rubbish—old wadding left to rot on the battle-field after the victory is won.

And now I appeal to all—are you really willing that the Declaration shall be thus frittered away?—thus left no more at most, than an interesting memorial of the dead past? …shorn of its vitality, and practical value; and left without the germ or even the suggestion of the individual rights of man in it?