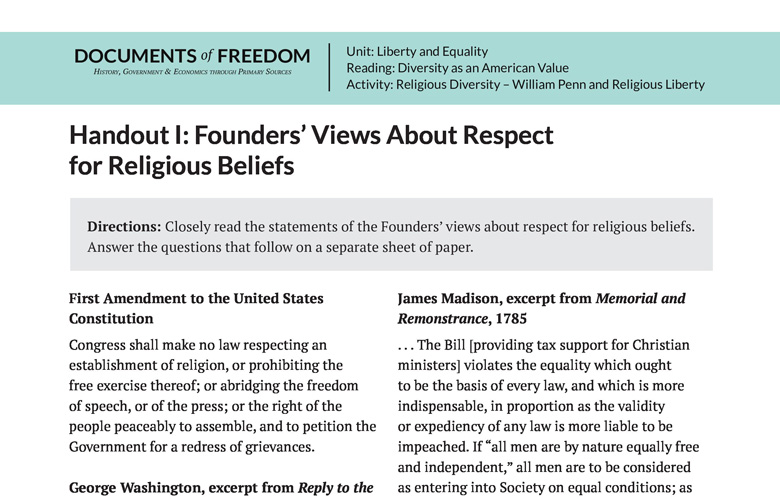 Handout I: Founders’ Views About Respect for Religious Beliefs

Directions: Closely read the statements of the Founders’ views about respect for religious beliefs. Answer the questions that follow on a separate sheet of paper.

Congress shall make no law respecting an establishment of religion, or prohibiting the free exercise thereof; or abridging the freedom of speech, or of the press; or the right of the people peaceably to assemble, and to petition the Government for a redress of grievances.

George Washington, excerpt from Reply to the Hebrew Congregation, 1790

. . . The Citizens of the United States of America have a right to applaud themselves for having given to mankind examples of an enlarged and liberal policy: a policy worthy of imitation. All possess alike liberty of conscience and immunities of citizenship. It is now no more that toleration is spoken of, as if it was by the indulgence of one class of people, that another enjoyed the exercise of their inherent natural rights. For happily the Government of the United States, which gives to bigotry no sanction, to persecution no assistance requires only that they who live under its protection should demean themselves as good citizens, in giving it on all occasions their effectual support . . .

. . . The Bill [providing tax support for Christian ministers] violates the equality which ought to be the basis of every law, and which is more indispensable, in proportion as the validity or expediency of any law is more liable to be impeached. If “all men are by nature equally free and independent,” all men are to be considered as entering into Society on equal conditions; as relinquishing no more, and therefore retaining no less, one than another, of their natural rights. Above all are they to be considered as retaining an “equal title to the free exercise of Religion according to the dictates of Conscience.” Whilst we assert for ourselves a freedom to embrace, to profess and to observe the Religion which we believe to be of divine origin, we cannot deny an equal freedom to those whose minds have not yet yielded to the evidence which has convinced us. If this freedom be abused, it is an offence against God, not against man: To God, therefore, not to man, must an account of it be rendered. As the Bill violates equality by subjecting some to peculiar burdens, so it violates the same principle, by granting to others peculiar exemptions. . .

Thomas Jefferson, excerpt from Letter to the Danbury Baptists, 1802

Believing with you that religion is a matter which lies solely between Man & his God, that he owes account to none other for his faith or his worship, that the legitimate powers of government reach actions only, and not opinions, I contemplate with sovereign reverence that act of the whole American people which declared that their legislature should “make no law respecting an establishment of religion, or prohibiting the free exercise thereof,” thus building a wall of separation between Church & State.