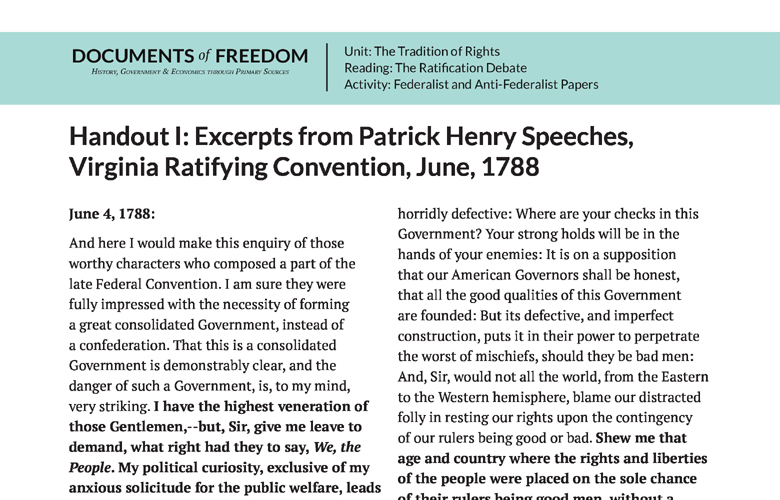 Directions: Read the excerpts and answer the Critical Thinking Questions.

And here I would make this enquiry of those worthy characters who composed a part of the late Federal Convention. I am sure they were fully impressed with the necessity of forming a great consolidated Government, instead of a confederation. That this is a consolidated Government is demonstrably clear, and the danger of such a Government, is, to my mind, very striking. I have the highest veneration of those Gentlemen,–but, Sir, give me leave to demand, what right had they to say, We, the People. My political curiosity, exclusive of my anxious solicitude for the public welfare, leads me to ask who authorized them to speak the language of, We, the People, instead of We, the States? States are the characteristics, and the soul of a confederation. If the States be not the agents of this compact, it must be one great consolidated National Government of the people of all the States.

This Constitution is said to have beautiful features; but when I come to examine these features, Sir, they appear to me horribly frightful: Among other deformities, it has an awful squinting; it squints towards monarchy: And does not this raise indignation in the breast of every American? Your President may easily become King: Your Senate is so imperfectly constructed that your dearest rights may be sacrificed by what may be a small minority; and a very small minority may continue forever unchangeably this Government, although horridly defective: Where are your checks in this Government? Your strong holds will be in the hands of your enemies: It is on a supposition that our American Governors shall be honest, that all the good qualities of this Government are founded: But its defective, and imperfect construction, puts it in their power to perpetrate the worst of mischiefs, should they be bad men: And, Sir, would not all the world, from the Eastern to the Western hemisphere, blame our distracted folly in resting our rights upon the contingency of our rulers being good or bad. Shew me that age and country where the rights and liberties of the people were placed on the sole chance of their rulers being good men, without a consequent loss of liberty? I say that the loss of that dearest privilege has ever followed with absolute certainty, every such mad attempt.

If your American chief, be a man of ambition, and abilities, how easy is it for him to render himself absolute: The army is in his hands, and, if he be a man of address, it will be attached to him; and it will be the subject of long meditation with him to seize the first auspicious moment to accomplish his design; and, Sir, will the American spirit solely relieve you when this happens? I would rather infinitely, and I am sure most of this Convention are of the same opinion, have a King, Lords, and Commons, than a Government so replete with such insupportable evils. If we make a King, we may prescribe the rules by which he shall rule his people, and interpose such checks as shall prevent him from infringing them: But the President, in the field, at the head of his army, can prescribe the terms on which he shall reign master, so far that it will puzzle any American ever to get his neck from under the galling yoke. I cannot with patience, think of this idea. If ever he violates the laws, one of two things will happen: He shall come at the head of his army to carry every thing before him; or, he will give bail, or do what Mr. Chief Justice will order him. If he be guilty, will not the recollection of his crimes teach him to make one bold push for the American throne? Will not the immense difference between being master of every thing, and being ignominiously tried and punished, powerfully excite him to make this bold push? But, Sir, where is the existing force to punish him? Can he not at the head of his army beat down every opposition? Away with your President, we shall have a King: The army will salute him Monarch; your militia will leave you and assist in making him King, and fight against you: And what have you to oppose this force? What will then become of you and your rights? Will not absolute despotism ensue?