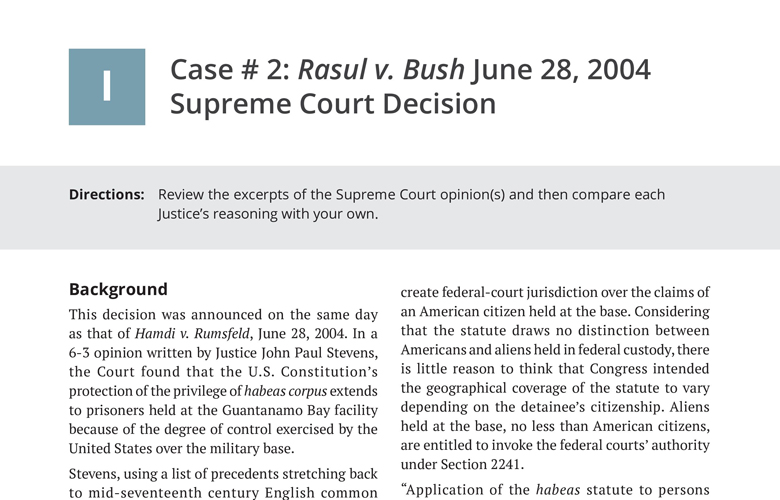 Directions: Review the excerpts of the Supreme Court opinion(s) and then compare each Justice’s reasoning with your own.

This decision was announced on the same day as that of Hamdi v. Rumsfeld, June 28, 2004. In a 6-3 opinion written by Justice John Paul Stevens, the Court found that the U.S. Constitution’s protection of the privilege of habeas corpus extends to prisoners held at the Guantanamo Bay facility because of the degree of control exercised by the United States over the military base.

Stevens, using a list of precedents stretching back to mid-seventeenth century English common law cases, found that the right to habeas corpus can be exercised in “all … dominions under the sovereign’s control.” Because the United States exercised “complete jurisdiction and control” over the Guantanamo naval base, the fact that ultimate sovereignty remained with Cuba was irrelevant. Further, Stevens wrote that the right to habeas corpus, which is detailed in Section 2241 of the United States Code (referred to as the “habeas statute”) is not dependent on citizenship status. The detainees were therefore free to bring suit challenging their detention as unconstitutional.

“By the express terms of its agreements with Cuba, [the 1903 Lease Agreement and the 1934 Treaty] the United States exercises “complete jurisdiction and control” over the Guantanamo Bay Naval Base, and may continue to exercise such control permanently if it so chooses. [The U.S. government itself] concedes that the habeas statute would create federal-court jurisdiction over the claims of an American citizen held at the base. Considering that the statute draws no distinction between Americans and aliens held in federal custody, there is little reason to think that Congress intended the geographical coverage of the statute to vary depending on the detainee’s citizenship. Aliens held at the base, no less than American citizens, are entitled to invoke the federal courts’ authority under Section 2241.

“Application of the habeas statute to persons detained at the base is consistent with the historical reach of the writ of habeas corpus. At common law, courts exercised habeas jurisdiction over the claims of aliens detained within sovereign territory of the realm… and all other dominions under the sovereign’s control…

“In the end, the answer to the question presented is clear. Petitioners contend that they are being held in federal custody in violation of the laws of the United States. No party questions the District Court’s jurisdiction over petitioners’ custodians. Section 2241, by its terms, requires nothing more. We therefore hold that Section 2241 confers on the District Court jurisdiction to hear petitioners’ habeas corpus challenges to the legality of their detention at the Guantanamo Bay Naval Base.”

“The petitioners do not argue that the Constitution independently requires jurisdiction here. Accordingly, this case turns on the words of Section 2241, a text the Court today largely ignores. “Even a cursory reading of the habeas statute shows that it presupposes a federal district court with territorial jurisdiction over the detainee. Section 2241(a) states:

‘Writs of habeas corpus may be granted by the Supreme Court, any justice thereof, the district courts and any circuit judge within their respective jurisdictions.’ (Emphasis added).

“The reality is this: Today’s opinion, and today’s opinion alone, overrules Eisentrager; today’s opinion, and today’s opinion alone, extends the habeas statute, for the first time, to aliens held beyond the sovereign territory of the United States and beyond the territorial jurisdiction of its courts. No reasons are given for this result; no acknowledgment of its consequences made… [T]he Court evades explaining why stare decisis can be disregarded, and why Eisentrager was wrong. Normally, we consider the interests of those who have relied on our decisions. Today, the Court springs a trap on the Executive, subjecting Guantanamo Bay to the oversight of the federal courts even though it has never before been thought to be within their jurisdiction—and thus making it a foolish place to have housed alien wartime detainees…

“Departure from our rule of stare decisis in statutory cases is always extraordinary; it ought to be unthinkable when the departure has a potentially harmful effect upon the Nation’s conduct of a war. The Commander in Chief and his subordinates had every reason to expect that the internment of combatants at Guantanamo Bay would not have the consequence of bringing the cumbersome machinery of our domestic courts into military affairs. Congress is in session. If it wished to change federal judges’ habeas jurisdiction from what this Court had previously held that to be, it could have done so. … For this Court to create such a monstrous scheme in time of war, and in frustration of our military commanders’ reliance upon clearly stated prior law, is judicial adventurism of the worst sort. I dissent.”