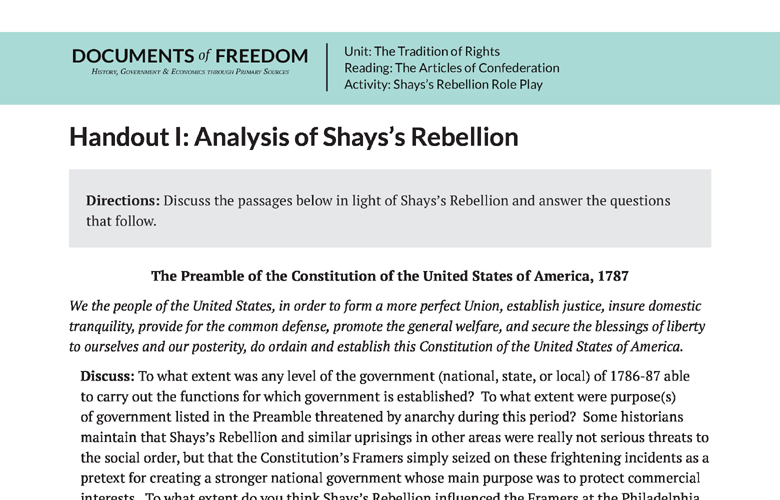 Handout I: Analysis of Shays’s Rebellion

Directions: Discuss the passages below in light of Shays’s Rebellion and answer the questions that follow.

The Preamble of the Constitution of the United States of America, 1787

We the people of the United States, in order to form a more perfect Union, establish justice, insure domestic tranquility, provide for the common defense, promote the general welfare, and secure the blessings of liberty to ourselves and our posterity, do ordain and establish this Constitution of the United States of America.

Discuss: To what extent was any level of the government (national, state, or local) of 1786-87 able to carry out the functions for which government is established? To what extent were purpose(s) of government listed in the Preamble threatened by anarchy during this period? Some historians maintain that Shays’s Rebellion and similar uprisings in other areas were really not serious threats to the social order, but that the Constitution’s Framers simply seized on these frightening incidents as a pretext for creating a stronger national government whose main purpose was to protect commercial interests. To what extent do you think Shays’s Rebellion influenced the Framers at the Philadelphia Convention in 1787?

“I hold it, that a little rebellion, now and then, is a good thing, and as necessary in the political world as storms are in the physical… It is a medicine necessary for the sound health of government.” Thomas Jefferson, in a letter to James Madison, Jan., 1787

“The tree of liberty must be refreshed from time to time, with the blood of patriots and tyrants. It is its natural manure.” Thomas Jefferson, in a letter to Wm. Stephens Smith, Nov., 1787

Discuss: How might Jefferson’s opinion have been affected by the fact that he was living in Paris at the time of Shays’s Rebellion?

Discuss: In what ways can this famous passage from Federalist No. 51 be related to Shays’s Rebellion?

Adapted from a lesson originally published in LEGACY: Challenging Lessons in Civics and Citizenship; Linking Educators and the Gifted with Attorneys for Civics – Yes! Edited by Julia P. Hardin Published by the Center for Research and Development in Law-Related Education, Winston-Salem, North Carolina, 1995.