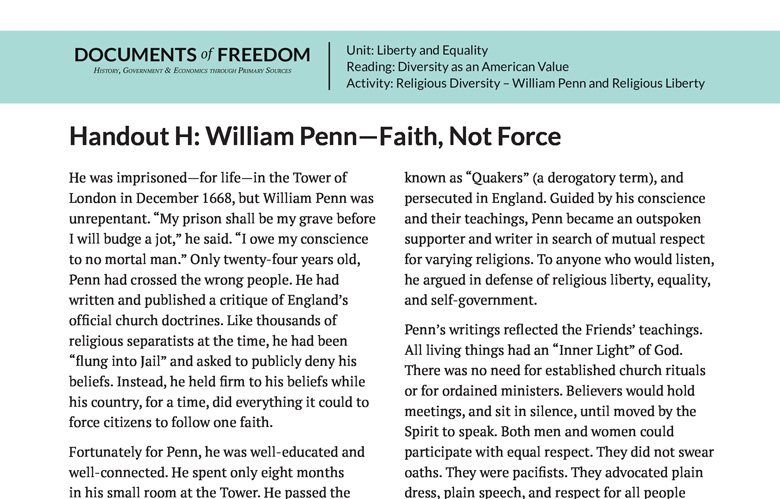 He was imprisoned—for life—in the Tower of London in December 1668, but William Penn was unrepentant. “My prison shall be my grave before I will budge a jot,” he said. “I owe my conscience to no mortal man.” Only twenty-four years old, Penn had crossed the wrong people. He had written and published a critique of England’s official church doctrines. Like thousands of religious separatists at the time, he had been “flung into Jail” and asked to publicly deny his beliefs. Instead, he held firm to his beliefs while his country, for a time, did everything it could to force citizens to follow one faith.

Fortunately for Penn, he was well-educated and well-connected. He spent only eight months in his small room at the Tower. He passed the time writing two more influential essays with nonconformist views. In 1669, a family friend (James, Duke of York, and later King James II) secured his release perhaps upon the urging of Penn’s father, a wealthy and respected admiral in the royal navy.

Sir William Penn was extremely familiar with, and not very happy about, his son’s tendency to flout tradition. After his son had been kicked out of Oxford at seventeen for expressing his religious views and for not attending required religious services, it was his father who sent him to study at a Protestant school in France, hoping to reform him. When that too failed, it was his father who called Penn back to England, put him in law school, and introduced him to the king’s court. He was well received.

Nevertheless, in 1666 at the age of twenty-two, Penn had joined the Religious Society of Friends, a new and radical religious group. They were known as “Quakers” (a derogatory term), and persecuted in England. Guided by his conscience and their teachings, Penn became an outspoken supporter and writer in search of mutual respect for varying religions. To anyone who would listen, he argued in defense of religious liberty, equality, and self-government.

Penn’s writings reflected the Friends’ teachings. All living things had an “Inner Light” of God. There was no need for established church rituals or for ordained ministers. Believers would hold meetings, and sit in silence, until moved by the Spirit to speak. Both men and women could participate with equal respect. They did not swear oaths. They were pacifists. They advocated plain dress, plain speech, and respect for all people and living things. They used the informal “thee” instead of “you” regardless of social standing. They would not remove their hats in public places or in deference to superiors. They did not baptize nor take communion. In short, their views were considered heretical and controversial.

By the time his father passed away in 1670, Penn had published more essays, preached in the streets, and been arrested again. “I publickly confess myself to be a very hearty Dissenter from the established worship of these nations…” he wrote that year. The Society of Friends continued to be persecuted, and he openly questioned the authority of the government to restrict by law the religious beliefs of man. “It enthroned Man as king over conscience,” he declared in his essay “The Great Case of Liberty of Conscience.”

Around the same time, Penn became increasingly interested in America—both as an economic activity and as an experiment in self-government and freedom of religion. He managed land in West New Jersey, and wrote, it is believed, its “Concessions and Agreements” in 1672. The document included a rare protection: “No Men . . . hath Power of authority to rule over Men’s Consciences and Religious matters.”

Uncertain about the future of religious toleration in England, in the years that followed Penn petitioned the king to begin a colony in America. In March 1681, he was given ownership of the “largest remaining piece of land,” nearly 45,000 square miles of sparsely settled forest sandwiched between New York and Maryland. He wanted to call it “New Wales” or “Sylvania” but the king ordered it named after Penn’s father, “Penn’s Woods” – Pennsylvania.

Penn advertised the colony, calling on “adventurers” from all nations and faiths to settle there. He promised them that they would be “governed by laws of your own making” and free to practice whatever religion they chose. In five years, Pennsylvania had six thousand settlers. Penn called it his “Holy Experiment.”

Pennsylvania could not be just a haven for religious dissenters. Penn believed that respect for individual liberty would bring economic prosperity. He worked hard to recruit ambitious adventurers and affluent supporters. He carefully selected the location for Philadelphia (the City of Brotherly Love), so that it would become a bustling commercial center. He kept in mind the king’s charter and its goal: enlarge the English empire, make money, and convert “Natives” to Christianity. Penn would have unprecedented powers as governor and would answer to the king.

Penn first arrived in the colony in 1682 on a ship called the Welcome. He met with the settlers and presided over the first session of the House of Representatives. He presented his First Frame of Government, which included the provision: “That all persons living in this province, who . . . acknowledge the one Almighty and eternal God . . . and that hold themselves obliged in conscience to live peaceably and justly in civil society, shall, in no ways, be molested or prejudiced for their religious persuasion, or practice, in matters of faith and worship, nor . . . be compelled . . . to frequent or maintain any religious worship, place or ministry. . . ”

He was the first colonial governor willing to put in place such radical protections. In the early years, the frame was amended, but respect for religious liberty remained. Penn stayed just long enough to build peaceful relationships with the Native Americans and oversaw early legislative efforts. He then returned to England and spent most of his life there defending colonial interests.

The colony prospered. Although it would never become the ideal state he had imagined, 20,000 settlers were living there when Penn returned fifteen years later in 1699. They came from a wide variety of sects—Quakers, Lutherans, Reformed, Mennonites, Amish, German Baptist Brethren (“Dunkers”), Schwenkfelders, Presbyterians, and Moravians—and lived together respectfully and peacefully. (Catholics, Jews, and Methodists would follow in the early 1700s.)

Penn’s conviction that “no People can be truly happy, though under the greatest Enjoyment of Civil Liberties, if abridged of the Freedom of their Consciences” became the first provision of Pennsylvania’s new Charter of Privileges in 1701. William Penn believed that good government could not be coercive, force a faith, or require conformity. An abiding respect for individual beliefs and for self-government, he maintained, would bring peace and prosperity to Pennsylvania—and it did.