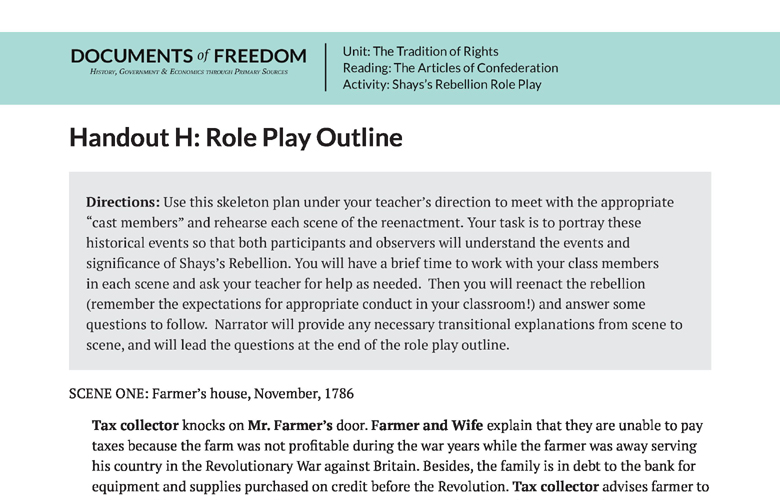 Directions: Use this skeleton plan under your teacher’s direction to meet with the appropriate “cast members” and rehearse each scene of the reenactment. Your task is to portray these historical events so that both participants and observers will understand the events and significance of Shays’s Rebellion. You will have a brief time to work with your class members in each scene and ask your teacher for help as needed. Then you will reenact the rebellion (remember the expectations for appropriate conduct in your classroom!) and answer some questions to follow. Narrator will provide any necessary transitional explanations from scene to scene, and will lead the questions at the end of the role play outline.

Tax collector knocks on Mr. Farmer’s door. Farmer and Wife explain that they are unable to pay taxes because the farm was not profitable during the war years while the farmer was away serving his country in the Revolutionary War against Britain. Besides, the family is in debt to the bank for equipment and supplies purchased on credit before the Revolution. Tax collector advises farmer to sell something to raise enough money to pay taxes, or he faces foreclosure. After the tax collector leaves, Farmer and Wife, at kitchen table, struggle to think of a way to pay their debts and taxes. They talk about the fact that they have always been honorable people, and would pay their bills if they could think of a way. But the only things of value that they have are their house, farm, and the equipment they still owe money on. If they sold or lost these items, how would they support themselves? Besides, most of their neighbors are in the same situation. It does not seem fair that hard working, honorable people who have fought for their country and won independence would face such a sad situation. The farmer was not even paid for his years of service in the Revolutionary Army, because General Washington could not raise enough money to do so. Children whine from fear and hunger.

Tax collector returns to farmer’s house, this time with Mr. Sheriff. Tax collector gives the farmer another chance to pay taxes, but when he cannot, Mr. Sheriff escorts Mr. Farmer into town. Children whine from fear and hunger. Wife is desperate and hopeless; tries to be strong.

SCENE THREE: Inside the courthouse

Judge presides over foreclosure hearing for farmer. Mr. Farmer explains why he is unable to pay debts and taxes, lists the items he has sold trying to raise the money, including such possessions as furniture, livestock, and farm equipment. How can the family carry on without the necessary tools of farming? How can he plow the stony fields if his team of oxen is sold to pay debts and taxes? Mr. Banker testifies that the depositors in his bank, also hard working people in the community, expect their money to be safe. When people like the Farmer family do not pay their debts, the bank cannot continue to operate. Mr. Banker, a long time friend of the Farmers and people like them, is sympathetic, but the rights of property owners and lenders must take precedence over debtors who cannot pay.

Before he renders judgment, His (or Her) Honor delivers a brief speech describing disapproval of laws written by some state legislatures. These laws cancel the debts of people like Mr. Farmer and provide for the issuance of inflated paper money. While these laws are popular with the majority in those states, because they benefit anyone who owes money, they spell disaster for the overall economic system and make it impossible for the businessman to stay afloat. His Honor, like Mr. Banker, is sympathetic to the Farmer family. After all, their fathers helped build each other’s barns. Nevertheless, the justice system must not be swayed by sympathy, and must send the message that debts must be paid. Therefore, His Honor orders the Farmers’ place sold for payment of back taxes and other debts. And to make the message to the community very clear, the Judge orders Mr. Farmer to jail. Children whine from hunger and fear. Mrs. Farmer, hopeless, tries to be strong, and vows to keep the family together somehow until her husband is released and returns to support them. Mr. Sheriff escorts Mr. Farmer to jail.

SCENE FOUR: Outside the courthouse

Angry Farmers of the community who are also Revolutionary veterans, brave men who have served their country faithfully, hear of the judge’s decision, and angrily storm the front door of the courthouse. They know it is only a matter of time until their inability to pay their debts may lead to the same result. His Honor, hearing the riot, barely escapes out the back door, afraid for his life. A group of the farmers remains at the courthouse, preventing the judge from returning.

SCENE FIVE: Beginning near the courthouse, ending at the arsenal

Daniel Shays meets with some of the farmers and the group decides that they need to lay siege to Boston and force the Massachusetts legislature to write laws similar to those described by the judge, canceling debts. Then the money-grubbing leeches will no longer be able to persecute hardworking veterans and take away the fathers of little children! But before they can take control of the statehouse, they must have weapons. Therefore, brandishing pitchforks and shovels, they threaten to take over the arsenal at Springfield. The guards at the arsenal somehow hold out against the poorly armed mob, and notify Massachusetts Governor James Bowdoin of the trouble.

Governor Bowdoin responds to try to restore order, and asks the Continental Congress to send in troops. However, the Continental Congress can raise neither troops nor money. He then turns to the Massachusetts Militia. He finds, however, that the Massachusetts militia is not functioning; most of them are debt-ridden farmer/veterans. In desperation, he collects private funds and rounds up a private army under the command of General Benjamin Lincoln, which finally marches on Springfield in February, 1787. The soldiers fire a few shots and three people are killed. The soldiers disperse the rebels, who flee to nearby states, or the independent republic of Vermont. In April of 1787, Daniel Shays and several of his men are tried for treason, and sentenced to hang for their crimes. However, they are eventually pardoned.

Narrator—Let us review the events of Shays’s Rebellion. Each cast member will tell who he/she was, the actions he/she took, and why.