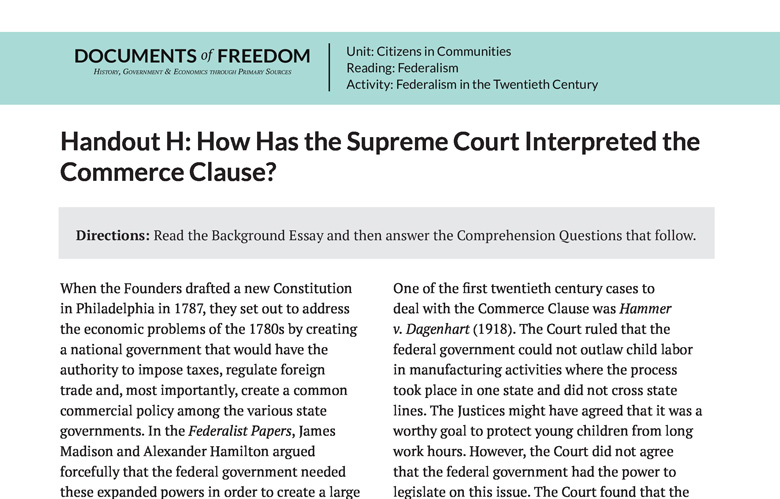 Handout H: How Has the Supreme Court Interpreted the Commerce Clause?

Directions: Read the Background Essay and then answer the Comprehension Questions that follow.

When the Founders drafted a new Constitution in Philadelphia in 1787, they set out to address the economic problems of the 1780s by creating a national government that would have the authority to impose taxes, regulate foreign trade and, most importantly, create a common commercial policy among the various state governments. In the Federalist Papers, James Madison and Alexander Hamilton argued forcefully that the federal government needed these expanded powers in order to create a large free trading area within the continental United States and to regulate conflicting state economic interests for the common good. They also argued for a strong commercial policy to open up markets for foreign trade.

The reach of the Commerce Clause, found in Article I, Section 8 of the Constitution, is an important focus of debate about federal power. It states, “Congress shall have the power…to regulate commerce with foreign Nations, and among the several States, and with the Indian Tribes.” The first Supreme Court case on this part of the Constitution was Gibbons v. Ogden in 1824. The Court held that the Commerce Clause granted Congress “the power to regulate; that is, to prescribe the rule by which commerce is to be governed.” That power extended to interstate commerce: “Comprehensive as the word ‘among’ is, it may very properly be restricted to that commerce which concerns more States than one.”

One of the first twentieth century cases to deal with the Commerce Clause was Hammer v. Dagenhart (1918). The Court ruled that the federal government could not outlaw child labor in manufacturing activities where the process took place in one state and did not cross state lines. The Justices might have agreed that it was a worthy goal to protect young children from long work hours. However, the Court did not agree that the federal government had the power to legislate on this issue. The Court found that the Tenth Amendment left this power to the states and that Congress could not make rules related to the production of goods where interstate commerce was not involved.

Midway through the twentieth century, Congress started using the Commerce Clause as the grounds for the enactment of many new types of laws to regulate not merely commerce, but the conditions of economic and social life. The Commerce Clause has been a significant basis for the expansion of federal power. The Supreme Court changed its way of thinking in the 1930s under great political stress. President Franklin Delano Roosevelt proposed, and Congress passed, many new programs called the “New Deal.” One program was Social Security, which gave pensions and aid to the disabled and elderly through taxes paid by younger citizens. Other programs regulated the stock market. At first, the Supreme Court ruled in several cases that Congress had no authority to enact such laws. In 1937, President Roosevelt spoke out against the Supreme Court for its actions on the New Deal legislation. He wanted to be able to add one new justice for every current justice over the age of 70. Most experts now view his idea as a political plan to help his legislation. Some of the political conflict eased when one justice began voting to support the New Deal. Another justice retired and was replaced by a supporter of the New Deal programs.

The new majority found the increased federal power of New Deal legislation constitutional. The Supreme Court was going in a new direction. Congress was now able to create laws regulating, banning, and supporting a wide range of activities, and it did. Laws would be upheld as long as the Court was convinced that the regulated activities had a close and substantial relation to interstate commerce. Federal power expanded dramatically for over fifty years.

After 59 years of upholding legislation, in 1995 the Court ruled that Congress had gone too far under the Commerce Clause. In United States v. Lopez (1995), the Court struck down a federal law that created gun-free school zones. Congress had argued that because schools prepared people for the business world, there was a connection between schools and interstate commerce. Therefore, Congress argued, it could regulate guns in school. However, the Court ruled that the law dealt only with possession of arms and not interstate commerce. The Court appeared to be continuing in this direction when it overturned parts of the Violence Against Women Act in the 2000 case of U.S. v. Morrison. The Court held that the Commerce Clause did not give Congress the power to allow rape victims to sue their attackers in federal court for money damages. In Gonzalez v. Raich (2005), however, the Court did not continue this trend. It ruled Congress could ban marijuana throughout the nation even when an individual state had laws allowing individuals to grow their own marijuana for medicinal purposes. The Court reasoned that the policy within that single state would affect supply and demand, and therefore Congress’s ban was sufficiently related to interstate commerce.

In NFIB v. Sebelius (2012), the Supreme Court upheld most of the 2010 Affordable Care Act (ACA). The case involved a lawsuit by 26 state governments and multiple private plaintiffs, including the National Federation of Independent Business—the nation’s largest small business organization. They challenged the constitutionality of two key parts of the ACA: the individual health insurance mandate, which requires most Americans to purchase government-approved health insurance, and a provision forcing state governments to greatly expand the Medicaid health care program for the poor, or risk losing all their existing Medicaid funds.

The federal government claimed that the individual mandate was authorized by the Commerce Clause, the Necessary and Proper Clause, and the Tax Clause – which gives Congress the power to impose taxes. In a 5-4 decision, the Supreme Court rejected the first two arguments, but upheld the mandate on the third. In other words, the Court ruled that the Commerce Clause did not give Congress the power to force Americans to buy health insurance. But the mandate was a constitutional by virtue of its taxing power. Though the text of the ACA refers to a “penalty” and not a “tax,” Chief Justice Roberts reasoned that it was not a real penalty because it was “not a legal command to buy insurance.” It was merely a requirement that violators pay a fine. He also argued that the Court had a duty to construe the law as a tax, if such an interpretation were at all plausible, so as to give Congress the benefit of the doubt and avoid ruling that one of its laws was unconstitutional.