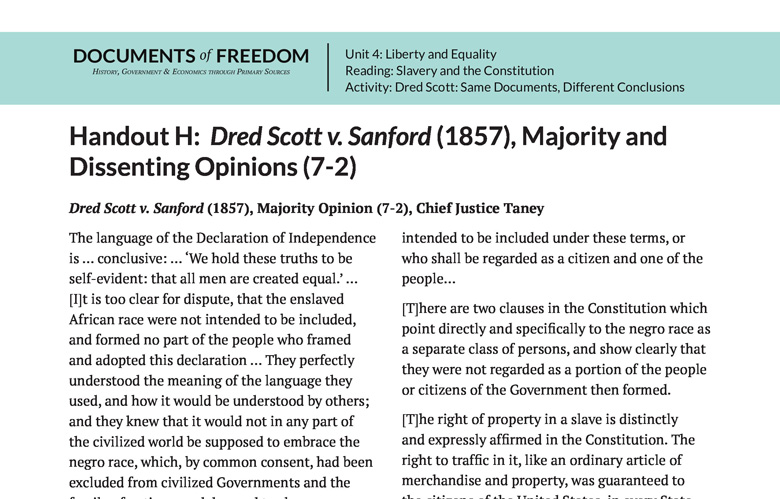 The language of the Declaration of Independence is … conclusive: … ‘We hold these truths to be self-evident: that all men are created equal.’ … [I]t is too clear for dispute, that the enslaved African race were not intended to be included, and formed no part of the people who framed and adopted this declaration … They perfectly understood the meaning of the language they used, and how it would be understood by others; and they knew that it would not in any part of the civilized world be supposed to embrace the negro race, which, by common consent, had been excluded from civilized Governments and the family of nations, and doomed to slavery…

The brief preamble [to the Constitution] … declares that it is formed by the people of the United States; that is to say, by those who were members of the different political communities in the several States; and its great object is declared to be to secure the blessings of liberty to themselves and their posterity. It speaks in general terms of the people of the United States, and of citizens of the several States, when it is providing for the exercise of the powers granted or the privileges secured to the citizen. It does not define what description of persons are intended to be included under these terms, or who shall be regarded as a citizen and one of the people…

[T]here are two clauses in the Constitution which point directly and specifically to the negro race as a separate class of persons, and show clearly that they were not regarded as a portion of the people or citizens of the Government then formed.

[T]he right of property in a slave is distinctly and expressly affirmed in the Constitution. The right to traffic in it, like an ordinary article of merchandise and property, was guaranteed to the citizens of the United States, in every State that might desire it, for twenty years. And the Government in express terms is pledged to protect it in all future time, if the slave escapes from his owner. This is done in plain words—too plain to be misunderstood. And no word can be found in the Constitution which gives Congress a greater power over slave property, or which entitles property of that kind to less protection than property of any other description. The only power conferred is the power coupled with the duty of guarding and protecting the owner in his rights.

Of this there can be no doubt. At the time of the ratification of the Articles of Confederation, all free native-born inhabitants of the States of New Hampshire, Massachusetts, New York, New Jersey, and North Carolina, though descended from African slaves, were not only citizens of those States, but such of them as had the other necessary qualifications possessed the franchise of electors, on equal terms with other citizens…

Did the Constitution of the United States deprive them or their descendants of citizenship?

That Constitution was ordained and established by the people of the United States, through the action, in each State, or those persons who were qualified by its laws to act thereon in behalf of themselves and all other citizens of that State. In some of the States, as we have seen, colored persons were among those qualified by law to act on this subject. These colored persons were not only included in the body of “the people of the United States” by whom the Constitution was ordained and established, but, in at least five of the States, they had the power to act, and doubtless did act, by their suffrages, upon the question of its adoption. It would be strange if we were to find in that instrument anything which deprived of their citizenship any part of the people of the United States who were among those by whom it was established.