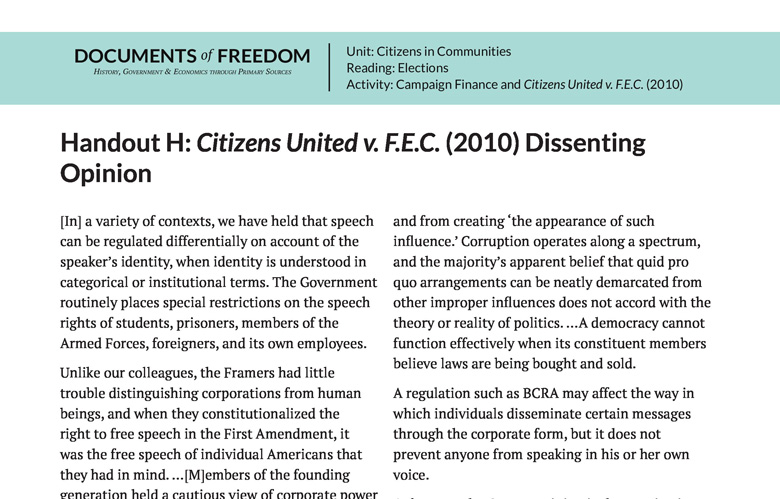 [In] a variety of contexts, we have held that speech can be regulated differentially on account of the speaker’s identity, when identity is understood in categorical or institutional terms. The Government routinely places special restrictions on the speech rights of students, prisoners, members of the Armed Forces, foreigners, and its own employees.

Unlike our colleagues, the Framers had little trouble distinguishing corporations from human beings, and when they constitutionalized the right to free speech in the First Amendment, it was the free speech of individual Americans that they had in mind. …[M]embers of the founding generation held a cautious view of corporate power and a narrow view of corporate rights … [and] they conceptualized speech in individualistic terms. If no prominent Framer bothered to articulate that corporate speech would have lesser status than individual speech, that may well be because the contrary proposition — if not also the very notion of “corporate speech” — was inconceivable.

On numerous occasions we have recognized Congress’s legitimate interest in preventing the money that is spent on elections from exerting an ‘undue influence on an officeholder’s judgment’ and from creating ‘the appearance of such influence.’ Corruption operates along a spectrum, and the majority’s apparent belief that quid pro quo arrangements can be neatly demarcated from other improper influences does not accord with the theory or reality of politics. …A democracy cannot function effectively when its constituent members believe laws are being bought and sold.

A regulation such as BCRA may affect the way in which individuals disseminate certain messages through the corporate form, but it does not prevent anyone from speaking in his or her own voice.

At bottom, the Court’s opinion is thus a rejection of the common sense of the American people, who have recognized a need to prevent corporations from undermining self-government since the founding, and who have fought against the distinctive corrupting potential of corporate electioneering since the days of Theodore Roosevelt. It is a strange time to repudiate that common sense. While American democracy is imperfect, few outside the majority of this Court would have thought its flaws included a dearth of corporate money in politics.