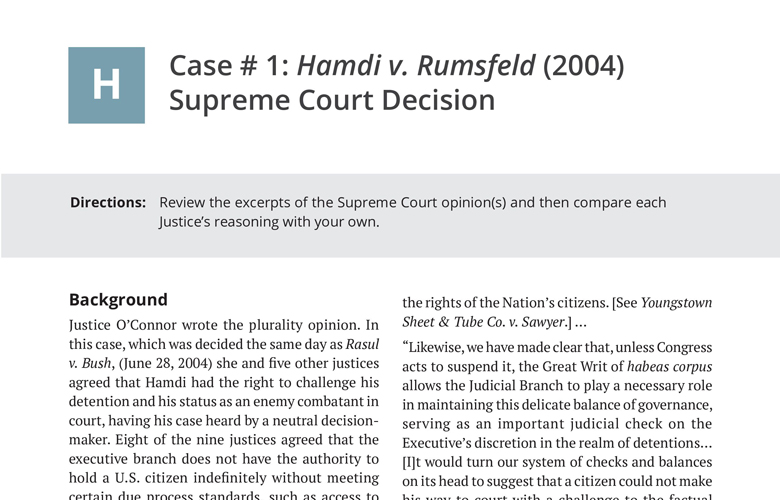 Directions: Review the excerpts of the Supreme Court opinion(s) and then compare each Justice’s reasoning with your own.

Justice O’Connor wrote the plurality opinion. In this case, which was decided the same day as Rasul v. Bush, (June 28, 2004) she and five other justices agreed that Hamdi had the right to challenge his detention and his status as an enemy combatant in court, having his case heard by a neutral decisionmaker. Eight of the nine justices agreed that the executive branch does not have the authority to hold a U.S. citizen indefinitely without meeting certain due process standards, such as access to an attorney, opportunity to challenge his enemy combatant classification and his detention, and an opportunity to rebut the government’s case against him.

“We conclude that detention of individuals falling into the limited category we are considering, for the duration of the particular conflict in which they were captured, is so fundamental and accepted an incident to war as to be an exercise of the ‘necessary and appropriate force’ Congress has authorized the President to use…A citizen, no less than an alien, can be ‘part of or supporting forces hostile to the United States or coalition partners’ and ‘engaged in an armed conflict against the United States,’… such a citizen, if released, would pose the same threat of returning to the front during the ongoing conflict [as an alien]…

“We have long since made clear that a state of war is not a blank check for the President when it comes to the rights of the Nation’s citizens. [See Youngstown Sheet & Tube Co. v. Sawyer.] …

“Likewise, we have made clear that, unless Congress acts to suspend it, the Great Writ of habeas corpus allows the Judicial Branch to play a necessary role in maintaining this delicate balance of governance, serving as an important judicial check on the Executive’s discretion in the realm of detentions… [I]t would turn our system of checks and balances on its head to suggest that a citizen could not make his way to court with a challenge to the factual basis for his detention by his government, simply because the Executive opposes making available such a challenge. Absent suspension of the writ by Congress, a citizen detained as an enemy combatant is entitled to this process…

“Any process in which the Executive’s factual assertions go wholly unchallenged or are simply presumed correct without any opportunity for the alleged combatant to demonstrate otherwise falls constitutionally short…Plainly, the ‘process’ Hamdi has received is not that to which he is entitled under the Due Process Clause.”

“[The Supreme Court lacks] the information and expertise to question whether Hamdi is actually an enemy combatant, a question the resolution of which is committed to other branches.

Accordingly, I conclude that the Government’s detention of Hamdi as an enemy combatant does not violate the Constitution. By detaining Hamdi, the President, in the prosecution of a war and authorized by Congress, has acted well within his authority. Hamdi thereby received all the process to which he was due under the circumstances. I therefore believe that this is no occasion to balance the competing interests, as the plurality unconvincingly attempts to do.”

When the Court announced the decision that Hamdi was entitled to challenge before a neutral decision-maker both his classification as an enemy combatant and his detention, the federal government decided to release him rather than conduct further proceedings. He was released and sent back to Saudi Arabia in October 2004, subject to certain travel restrictions. He was also required to renounce his American citizenship and agree not to sue the U.S. for any injuries sustained while he was imprisoned.