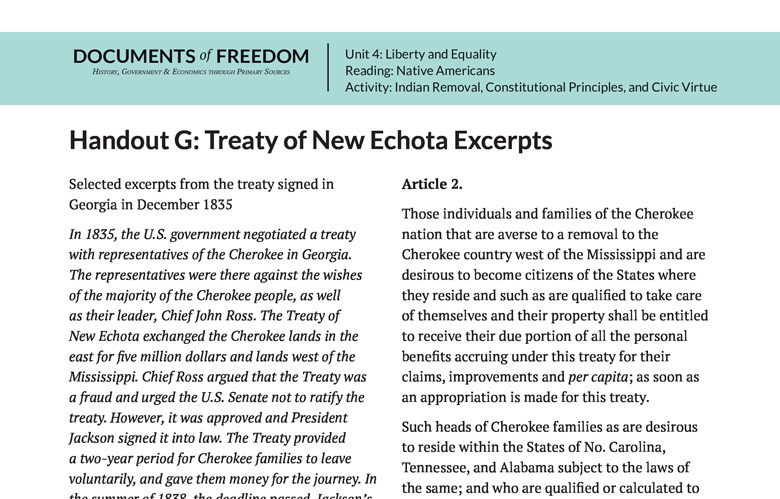 Selected excerpts from the treaty signed in Georgia in December 1835

In 1835, the U.S. government negotiated a treaty with representatives of the Cherokee in Georgia. The representatives were there against the wishes of the majority of the Cherokee people, as well as their leader, Chief John Ross. The Treaty of New Echota exchanged the Cherokee lands in the east for five million dollars and lands west of the Mississippi. Chief Ross argued that the Treaty was a fraud and urged the U.S. Senate not to ratify the treaty. However, it was approved and President Jackson signed it into law. The Treaty provided a two-year period for Cherokee families to leave voluntarily, and gave them money for the journey. In the summer of 1838, the deadline passed. Jackson’s successor, President Martin Van Buren, ordered the U.S. Army to proceed with forced removal. This removal took place during the winter of 1838 during the winter of 1838-1839. During the Trail of Tears, as it has come to be known, 14,000 men, women, and children were forced to march from their homes to lands in present-day Oklahoma. Four thousand people died.

Article 1.
The Cherokee nation hereby cede relinquish and convey to the United States all the lands owned claimed or possessed by them east of the Mississippi river, and hereby release all their claims upon the United States for spoliations of every kind for and in consideration of the sum of five millions of dollars to be expended paid and invested in the manner stipulated and agreed upon in the following articles

Article 2.
Those individuals and families of the Cherokee nation that are averse to a removal to the Cherokee country west of the Mississippi and are desirous to become citizens of the States where they reside and such as are qualified to take care of themselves and their property shall be entitled to receive their due portion of all the personal benefits accruing under this treaty for their claims, improvements and per capita; as soon as an appropriation is made for this treaty.

Such heads of Cherokee families as are desirous to reside within the States of No. Carolina, Tennessee, and Alabama subject to the laws of the same; and who are qualified or calculated to become useful citizens shall be entitled, on the certificate of the commissioners to a preemption right to one hundred and sixty acres of land or one quarter section at the minimum Congress price; so as to include the present buildings or improvements of those who now reside there and such as do not live there at present shall be permitted to locate within two years any lands not already occupied by persons entitled to preemption privilege under this treaty and if two or more families live on the same quarter section and they desire to continue their residence in these States and are qualified as above specified they shall, on receiving their pre-emption certificate be entitled to the right of pre-emption to such lands as they may select not already taken by any person entitled to them under this treaty.

Article 16.
It is hereby stipulated and agreed by the Cherokees that they shall remove to their new homes within two years from the ratification of this treaty and that during such time the United States shall protect and defend them in their possessions and property and free use and occupation of the same and such persons as have been dispossessed of their improvements and houses; and for which no grant has actually issued previously to the enactment of the law of the State of Georgia, of December 1835 to regulate Indian occupancy shall be again put in possession and placed in the same situation and condition, in reference to the laws of the State of Georgia, as the Indians that have not been dispossessed; and if this is not done, and the people are left unprotected, then the United States shall pay the several Cherokees for their losses and damages sustained by them in consequence thereof. And it is also stipulated and agreed that the public buildings and improvements on which they are situated at New Echota for which no grant has been actually made previous to the passage of the above recited act if not occupied by the Cherokee people shall be reserved for the public and free use of the United States and the Cherokee Indians for the purpose of settling and closing all the Indian business arising under this treaty between the commissioners of claims and the Indians.