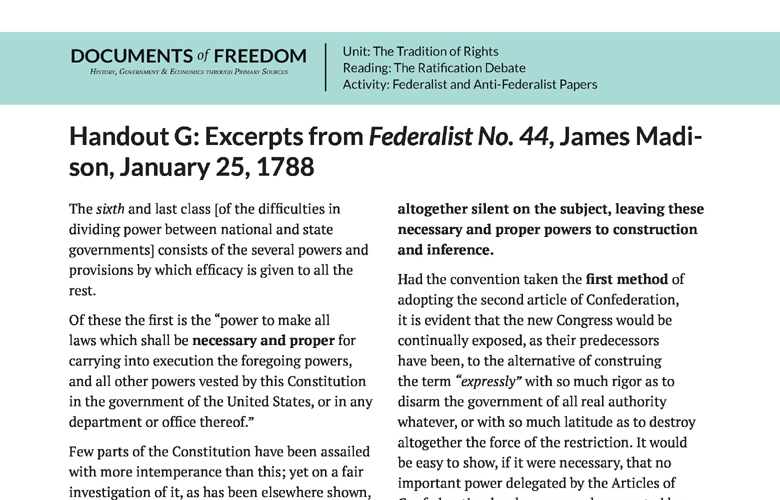 Directions: Read the excerpts and answer the Critical Thinking Questions.

The sixth and last class [of the difficulties in dividing power between national and state governments] consists of the several powers and provisions by which efficacy is given to all the rest.

Of these the first is the “power to make all laws which shall be necessary and proper for carrying into execution the foregoing powers, and all other powers vested by this Constitution in the government of the United States, or in any department or office thereof.”

Few parts of the Constitution have been assailed with more intemperance than this; yet on a fair investigation of it, as has been elsewhere shown, no part can appear more completely invulnerable. Without the substance of this power, the whole Constitution would be a dead letter. Those who object to the article, therefore, as a part of the Constitution, can only mean that the form of the provision is improper. But have they considered whether a better form could have been substituted?

Had the convention taken the first method of adopting the second article of Confederation, it is evident that the new Congress would be continually exposed, as their predecessors have been, to the alternative of construing the term “expressly” with so much rigor as to disarm the government of all real authority whatever, or with so much latitude as to destroy altogether the force of the restriction. It would be easy to show, if it were necessary, that no important power delegated by the Articles of Confederation has been or can be executed by Congress, without recurring more or less to the doctrine of construction or implication. As the powers delegated under the new system are more extensive, the government which is to administer it would find itself still more distressed with the alternative of betraying the public interests by doing nothing, or of violating the Constitution by exercising powers indispensably necessary and proper, but, at the same time, not expressly granted.

Had the convention attempted a positive enumeration of the powers necessary and proper for carrying their other powers into effect, the attempt would have involved a complete digest of laws on every subject to which the Constitution relates; accommodated too not only to the existing state of things, but to all the possible changes which futurity may produce; for in every new application of a general power, the particular powers, which are the means of attaining the object of the general power, must always necessarily vary with that object, and be often properly varied whilst the object remains the same.

Had the Constitution been silent on this head, there can be no doubt that all the particular powers requisite as means of executing the general powers would have resulted to the government by unavoidable implication. No axiom is more clearly established in law, or in reason, than that wherever the end is required, the means are authorized; wherever a general power to do a thing is given, every particular power necessary for doing it is included. Had this last method, therefore, been pursued by the convention, every objection now urged against their plan would remain in all its plausibility; and the real inconveniency would be incurred of not removing a pretext which may be seized on critical occasions for drawing into question the essential powers of the Union.

If it be asked what is to be the consequence, in case the Congress shall misconstrue this part of the Constitution and exercise powers not warranted by its true meaning, I answer the same as if they should misconstrue or enlarge any other power vested in them; as if the general power had been reduced to particulars, and any one of these were to be violated; the same, in short, as if the State legislatures should violate their respective constitutional authorities. In the first instance, the success of the usurpation will depend on the executive and judiciary departments, which are to expound and give effect to the legislative acts; and in the last resort a remedy must be obtained from the people who can, by the election of more faithful representatives, annul the acts of the usurpers. The truth is that this ultimate redress may be more confided in against unconstitutional acts of the federal than of the State legislatures, for this plain reason that as every such act of the former will be an invasion of the rights of the latter, these will be ever ready to mark the innovation, to sound the alarm to the people, and to exert their local influence in effecting a change of federal representatives. There being no such intermediate body between the State legislatures and the people interested in watching the conduct of the former, violations of the State constitutions are more likely to remain unnoticed and unredressed.