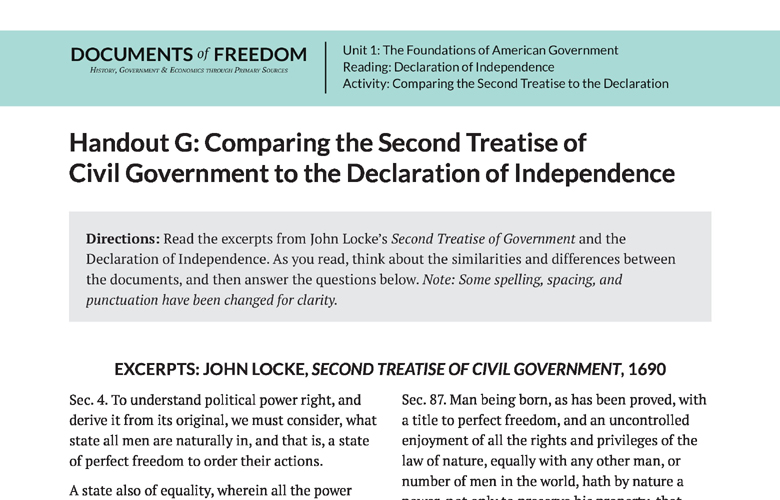 Handout G: Comparing the Second Treatise of Civil Government to the Declaration of Independence

Directions: Read the excerpts from John Locke’s Second Treatise of Government and the Declaration of Independence. As you read, think about the similarities and differences between the documents, and then answer the questions below. Note: Some spelling, spacing, and punctuation have been changed for clarity.

Sec. 4. To understand political power right, and derive it from its original, we must consider, what state all men are naturally in, and that is, a state of perfect freedom to order their actions. A state also of equality, wherein all the power and jurisdiction is reciprocal, no one having more [power] than another; …

Sec. 6. But though this be a state of liberty, yet it is not a state of license: though man in that state have an uncontrollable liberty to dispose of his person or possessions, yet he has not liberty to destroy himself, or so much as any creature in his possession, but where some nobler use than its bare preservation calls for it…

Sec. 87. Man being born, as has been proved, with a title to perfect freedom, and an uncontrolled enjoyment of all the rights and privileges of the law of nature, equally with any other man, or number of men in the world, hath by nature a power, not only to preserve his property, that is, his life, liberty and estate … But because no political society can be, nor subsist, without having in itself the power to preserve the property, and in order thereunto, punish the offences of all those of that society; there, and there only is political society … Those who are united into one body, and have a common established law and judicature to appeal to, with authority to decide controversies between them, and punish offenders, are in civil society one with another…

Sec. 124. The great and chief end, therefore, of men’s uniting into commonwealths, and putting themselves under government, is the preservation of their property. To which in the state of nature there are many things wanting. Sec. 222. …[W]henever the legislators endeavor to take away, and destroy the property of the people, or to reduce them to slavery under arbitrary power, they put themselves into a state of war with the people, who are thereupon absolved from any farther obedience …Whensoever therefore the legislative shall transgress this fundamental rule of society; and either by ambition, fear, folly or corruption, endeavour to grasp themselves, or put into the hands of any other, an absolute power over the lives, liberties, and estates of the people; by this breach of trust they forfeit the power the people had put into their hands for quite contrary ends, and it devolves to the people, who have a right to resume their original liberty, and, by the establishment of a new legislative, (such as they shall think fit provide for their own safety and security, which is the end for which they are in society.

The unanimous Declaration of the thirteen united States of America,

We hold these truths to be self-evident, that all men are created equal, that they are endowed by their Creator with certain unalienable Rights, that among these are Life, Liberty and the pursuit of Happiness.—That to secure these rights, Governments are instituted among Men, deriving their just powers from the consent of the governed,—that whenever any Form of Government becomes destructive of these ends, it is the Right of the People to alter or to abolish it, and to institute new Government, laying its foundation on such principles and organizing its powers in such form, as to them shall seem most likely to effect their Safety and Happiness. … But when a long train of abuses and usurpations, pursuing invariably the same Object evinces a design to reduce them under absolute Despotism, it is their right, it is their duty, to throw off such Government, and to provide new Guards for their future security…