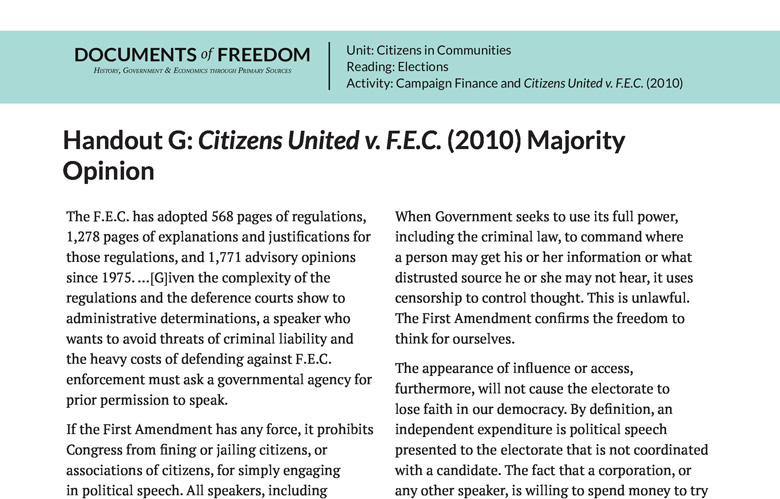 The F.E.C. has adopted 568 pages of regulations, 1,278 pages of explanations and justifications for those regulations, and 1,771 advisory opinions since 1975. …[G]iven the complexity of the regulations and the deference courts show to administrative determinations, a speaker who wants to avoid threats of criminal liability and the heavy costs of defending against F.E.C. enforcement must ask a governmental agency for prior permission to speak.

If the First Amendment has any force, it prohibits Congress from fining or jailing citizens, or associations of citizens, for simply engaging in political speech. All speakers, including individuals and the media, use money amassed from the economic marketplace to fund their speech. The First Amendment protects the resulting speech.

At the founding, speech was open, comprehensive, and vital to society’s definition of itself; there were no limits on the sources of speech and knowledge. …By suppressing the speech of manifold corporations, both for-profit and nonprofit, the Government prevents their voices and viewpoints from reaching the public and advising voters on which persons or entities are hostile to their interests. Factions will necessarily form in our Republic, but the remedy of ‘destroying the liberty’ of some factions is ‘worse than the disease’ [Federalist 10]. Factions should be checked by permitting them all to speak, and by entrusting the people to judge what is true and what is false…

When Government seeks to use its full power, including the criminal law, to command where a person may get his or her information or what distrusted source he or she may not hear, it uses censorship to control thought. This is unlawful. The First Amendment confirms the freedom to think for ourselves.

The appearance of influence or access, furthermore, will not cause the electorate to lose faith in our democracy. By definition, an independent expenditure is political speech presented to the electorate that is not coordinated with a candidate. The fact that a corporation, or any other speaker, is willing to spend money to try to persuade voters presupposes that the people have the ultimate influence over elected officials.

Rapid changes in technology — and the creative dynamic inherent in the concept of free expression — counsel against upholding a law that restricts political speech in certain media or by certain speakers. Today, 30-second television ads may be the most effective way to convey a political message. Soon, however, it may be that Internet sources … will provide citizens with significant information about political candidates and issues. Yet, [the BCRA] would seem to ban a blog post expressly advocating the election or defeat of a candidate if that blog were created with corporate funds. The First Amendment does not permit Congress to make these categorical distinctions based on the corporate identity of the speaker and the content of the political speech.