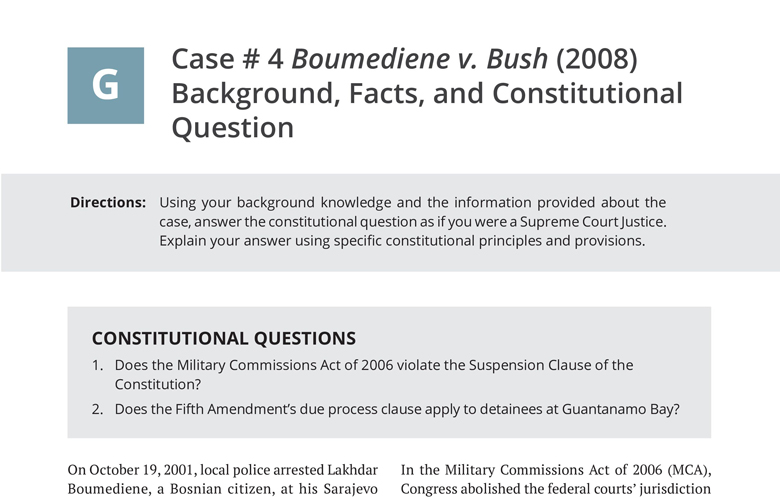 On October 19, 2001, local police arrested Lakhdar Boumediene, a Bosnian citizen, at his Sarajevo office, because United States authorities suspected him of involvement in a plot to bomb the American embassy in Sarajevo. Convinced that the arrest was a mistake by American agents, he cooperated with the police voluntarily because he believed the Americans would soon realize their mistake and let him go. Instead, the U.S. government classified Boumediene and five others arrested in Bosnia as enemy combatants and transported them to the detention facility at the Guantanamo naval base in January, 2002. When he filed a petition for a writ of habeas corpus, U.S. courts ruled that, as an alien enemy combatant detained at an overseas military base, Boumediene had no right to a habeas petition. The Supreme Court reversed this ruling in Rasul v. Bush (2006).

In the Military Commissions Act of 2006 (MCA), Congress abolished the federal courts’ jurisdiction to hear habeas petitions from enemy combatant detainees, applying the law to “all cases, without exception” that pertained to aspects of detention. Lawyers for the detainees maintained that the MCA violated the Suspension Clause, Article I, Section 9, Clause 2: “The Privilege of the Writ of Habeas Corpus shall not be suspended, unless when in Cases of Rebellion or Invasion the public Safety may require it.”

The U.S. government argued that the writ of habeas corpus does not apply to overseas military bases, and constitutional rights do not apply to aliens outside of the United States.