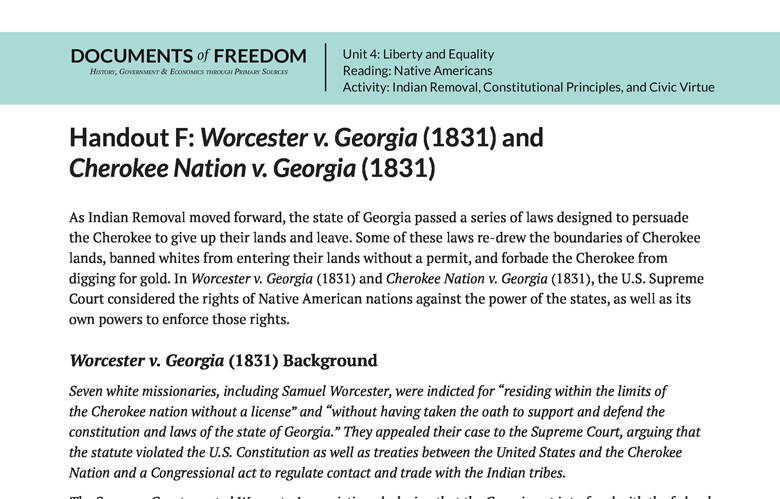 As Indian Removal moved forward, the state of Georgia passed a series of laws designed to persuade the Cherokee to give up their lands and leave. Some of these laws re-drew the boundaries of Cherokee lands, banned whites from entering their lands without a permit, and forbade the Cherokee from digging for gold. In Worcester v. Georgia (1831) and Cherokee Nation v. Georgia (1831), the U.S. Supreme Court considered the rights of Native American nations against the power of the states, as well as its own powers to enforce those rights.

Seven white missionaries, including Samuel Worcester, were indicted for “residing within the limits of the Cherokee nation without a license” and “without having taken the oath to support and defend the constitution and laws of the state of Georgia.” They appealed their case to the Supreme Court, arguing that the statute violated the U.S. Constitution as well as treaties between the United States and the Cherokee Nation and a Congressional act to regulate contact and trade with the Indian tribes.

The Supreme Court vacated Worcester’s conviction, declaring that the Georgia act interfered with the federal government’s authority and was unconstitutional. Georgia could not regulate activity on the Cherokee lands. An excerpt of Chief Justice John Marshall’s opinion is below.

Certain it is that our history furnishes no example, from the first settlement of our country, of any attempt, on the part of the Crown, to interfere with the internal affairs of the Indians farther than to keep out the agents of foreign powers who, as traders or otherwise, might seduct them into foreign alliances. The King purchased their lands when they were willing to sell, at a price they were willing to take, but never coerced a surrender of them. He also purchased their alliance and dependence by subsidies, but never intruded into the interior of their affairs or interfered with their self-government so far as respected themselves only.

The Treaty of Holston, negotiated with the Cherokees in July, 1791, explicitly recognising the national character of the Cherokees and their right of self-government, thus guarantying their lands, assuming the duty of protection, and of course pledging the faith of the United States for that protection, has been frequently renewed, and is now in full force.

To the general pledge of protection have been added several specific pledges deemed valuable by the Indians. Some of these restrain the citizens of the United States from encroachments on the Cherokee country, and provide for the punishment of intruders.

The treaties and laws of the United States contemplate the Indian territory as completely separated from that of the States, and provide that all intercourse with them shall be carried on exclusively by the Government of the Union.

The Cherokee nation, then, is a distinct community, occupying its own territory, with boundaries accurately described, in which the laws of Georgia can have no force, and which the citizens of Georgia have no right to enter but with the assent of the Cherokees themselves, or in conformity with treaties and with the acts of Congress. The whole intercourse between the United States and this nation is, by our Constitution and laws, vested in the Government of the United States.

The Cherokee Nation sought a federal injunction against laws passed by the state of Georgia, arguing deprivation of rights within its boundaries. The Supreme Court did not hear the case on its merits, ruling that it did not have jurisdiction to review the claims.

Do the Cherokees constitute a foreign state in the sense of the Constitution?

The counsel have shown conclusively that they are not a State of the union, and have insisted that, individually, they are aliens, not owing allegiance to the United States. An aggregate of aliens composing a State must, they say, be a foreign state. Each individual being foreign, the whole must be foreign.

This argument is imposing, but we must examine it more closely before we yield to it. The condition of the Indians in relation to the United States is perhaps unlike that of any other two people in existence. In the general, nations not owing a common allegiance are foreign to each other. The term foreign nation is, with strict propriety, applicable by either to the other. But the relation of the Indians to the United States is marked by peculiar and cardinal distinctions which exist nowhere else.

The Indian Territory is admitted to compose a part of the United States. In all our maps, geographical treatises, histories, and laws, it is so considered. In all our intercourse with foreign nations, in our commercial regulations, in any attempt at intercourse between Indians and foreign nations, they are considered as within the jurisdictional limits of the United States, subject to many of those restraints which are imposed upon our own citizens. They acknowledge themselves in their treaties to be under the protection of the United States; they admit that the United States shall have the sole and exclusive right of regulating the trade with them, and managing all their affairs as they think proper; and the Cherokees, in particular, were allowed by the treaty of Hopewell, which preceded the Constitution, “to send a deputy of their choice, whenever they think fit, to Congress.” Treaties were made with some tribes by the State of New York, under a then unsettled construction of the confederation by which they ceded all their lands to that State, taking back a limited grant to themselves in which they admit their dependence.

Though the Indians are acknowledged to have an unquestionable, and heretofore unquestioned right to the lands they occupy, until that right shall be extinguished by a voluntary cession to our government, yet it may well be doubted whether those tribes which reside within the acknowledged boundaries of the United States can, with strict accuracy, be denominated foreign nations. They may, more correctly, perhaps, be denominated domestic dependent nations. They occupy a territory to which we assert a title independent of their will, which must take effect in point of possession when their right of possession ceases. Meanwhile they are in a state of pupilage. Their relation to the United States resembles that of a ward to his guardian.

The motion for an injunction is denied.