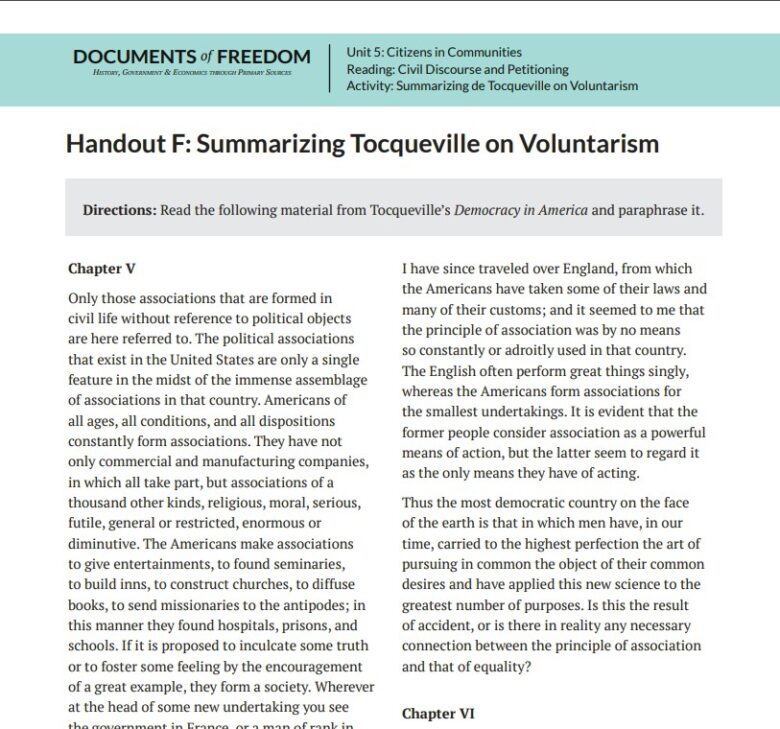 Directions: Read the following material from Tocqueville’s Democracy in America and paraphrase it.

Only those associations that are formed in civil life without reference to political objects are here referred to. The political associations that exist in the United States are only a single feature in the midst of the immense assemblage of associations in that country. Americans of all ages, all conditions, and all dispositions constantly form associations. They have not only commercial and manufacturing companies, in which all take part, but associations of a thousand other kinds, religious, moral, serious, futile, general or restricted, enormous or diminutive. The Americans make associations to give entertainments, to found seminaries, to build inns, to construct churches, to diffuse books, to send missionaries to the antipodes; in this manner they found hospitals, prisons, and schools. If it is proposed to inculcate some truth or to foster some feeling by the encouragement of a great example, they form a society. Wherever at the head of some new undertaking you see the government in France, or a man of rank in England, in the United States you will be sure to find an association.

I met with several kinds of associations in America of which I confess I had no previous notion; and I have often admired the extreme skill with which the inhabitants of the United States succeed in proposing a common object for the exertions of a great many men and in inducing them voluntarily to pursue it.

I have since traveled over England, from which the Americans have taken some of their laws and many of their customs; and it seemed to me that the principle of association was by no means so constantly or adroitly used in that country. The English often perform great things singly, whereas the Americans form associations for the smallest undertakings. It is evident that the former people consider association as a powerful means of action, but the latter seem to regard it as the only means they have of acting.

Thus the most democratic country on the face of the earth is that in which men have, in our time, carried to the highest perfection the art of pursuing in common the object of their common desires and have applied this new science to the greatest number of purposes. Is this the result of accident, or is there in reality any necessary connection between the principle of association and that of equality?

The political activity prevailing in the United States is something one could never understand unless one had seen it. No sooner do you set foot on American soil than you find yourself in a sort of tumult; a confused clamor rises on every side, and a thousand voices are heard at once, each expressing some social requirements. All around you everything is on the move: here the people of a district are assembled to discuss the possibility of building a church; there they are busy choosing a representative; further on, the delegates of a district are hurrying to town to consult about some local improvements; elsewhere it’s the village farmers who have left their furrows to discuss the plan for a road or a school…