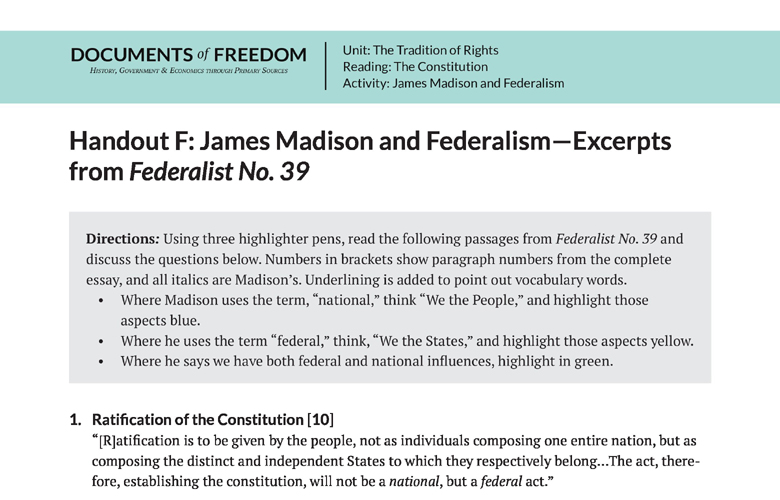 Handout F: James Madison and Federalism—Excerpts from Federalist No. 39

Directions: Using three highlighter pens, read the following passages from Federalist No. 39 and discuss the questions below. Numbers in brackets show paragraph numbers from the complete essay, and all italics are Madison’s. Underlining is added to point out vocabulary words.

Ratification of the Constitution [10]

“[R]atification is to be given by the people, not as individuals composing one entire nation, but as composing the distinct and independent States to which they respectively belong…The act, there-fore, establishing the constitution, will not be a national, but a federal act.”

The House of Representatives [12]

“[The House of Representatives] will derive its powers from the people of America; and the people will be represented in the same proportion, and on the same principle, as they are in the legislature of a particular state. So far the government is national, not federal.”

“[The Senate] will derive its powers from the states, as political and co-equal societies; and these will be represented on the principle of equality in the Senate, as they now are in the existing Congress. So far the government is federal, not national.”

“The idea of a national government involves in it, not only an authority over the individual citizens, but an indefinite supremacy over all persons and things, so far as they are objects of lawful government…[T]he proposed government cannot be deemed a national one; since its jurisdiction extends to certain enumerated objects only, and leaves to the several States a residuary and inviolable sovereignty over all other objects…”

“[On] the authority by which amendments are to be made, we find it neither wholly national nor wholly federal. Were it wholly national, the supreme and ultimate authority would reside in the majority of the people of the Union…Were it wholly federal on the other hand, the concurrence of each State in the Union would be essential to every alteration that would be binding on all… In requiring more than a majority, and particularly in computing the proportion by States, not by citizens, it departs from the national and advances towards the federal character; in rendering the concurrence of less than the whole number of States sufficient, it loses again the federal and partakes of the national character…”

“The proposed Constitution … [is] neither a national nor a federal Constitution, but a composition of both. In its foundation it is federal, not national; in the sources from which the ordinary powers of the government are drawn, it is partly federal and partly national; in the operation of these powers, it is national, not federal; in the extent of them, again it is federal, not national; and, finally, in the authoritative mode of introducing amendments, it is neither wholly federal nor wholly national.”