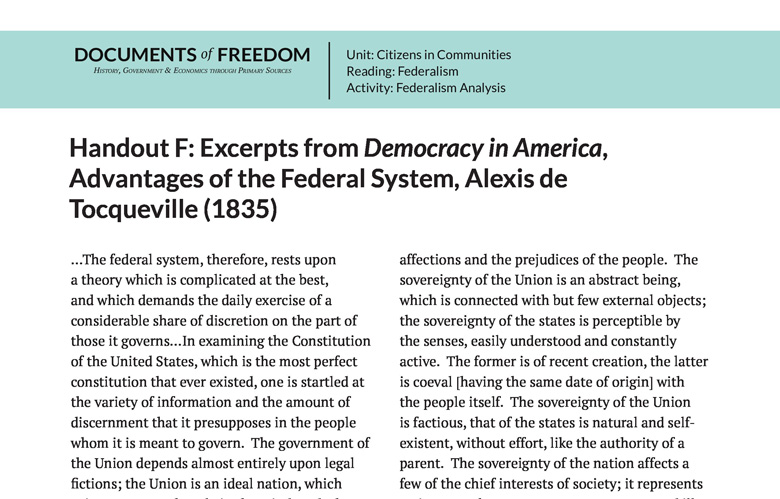 …The federal system, therefore, rests upon a theory which is complicated at the best, and which demands the daily exercise of a considerable share of discretion on the part of those it governs…In examining the Constitution of the United States, which is the most perfect constitution that ever existed, one is startled at the variety of information and the amount of discernment that it presupposes in the people whom it is meant to govern. The government of the Union depends almost entirely upon legal fictions; the Union is an ideal nation, which exists, so to speak, only in the mind, and whose limits and extent can only be discerned by the understanding… [However,] I scarcely ever met with a plain American citizen who could not distinguish with surprising facility the obligations created by the laws of Congress from those created by the laws of his own state and who after having discriminated between the matters which come under the cognizance of the Union and those which the local legislature is competent to regulate, could not point out the exact limit of the separate jurisdictions of the Federal courts and the tribunals of the state…

[An important defect in the American system of federalism] is the relative weakness of the government of the Union…The Union is possessed of money and troops, but the states have kept the affections and the prejudices of the people. The sovereignty of the Union is an abstract being, which is connected with but few external objects; the sovereignty of the states is perceptible by the senses, easily understood and constantly active. The former is of recent creation, the latter is coeval [having the same date of origin] with the people itself. The sovereignty of the Union is factious, that of the states is natural and self-existent, without effort, like the authority of a parent. The sovereignty of the nation affects a few of the chief interests of society; it represents an immense but remote country, a vague and ill-defined sentiment. The authority of the states controls every individual citizen at every hour and in all circumstances; it protect his property, his freedom and his life; it affects at every moment his well-being or his misery. When we recollect the traditions, the customs, and prejudices of local and familiar attachment with which it is connected, we cannot doubt the superiority of a power that rests on the instinct of patriotism, so natural to the human heart…The result of their [the Constitution’s Framers] efforts has been to make the federal government more independent in its sphere than are the states in theirs. But the federal government is hardly concerned with anything except foreign affairs; it is the state governments which really control American society.