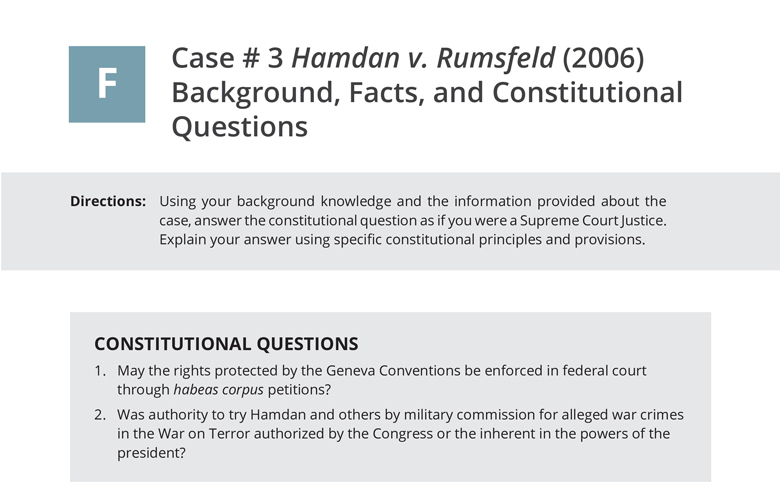 According to Pentagon documents, Salim Ahmed Hamdan, a Yemeni citizen, first met Osama bin Laden, al Qaeda’s leader, in 1996. The records detail that Hamdan received weapons training and became bin Laden’s personal driver and bodyguard, serving in that capacity until Afghan militia forces captured him in Afghanistan after the September 11, 2001 al Qaeda attacks on the United States. He was turned over to the U.S. military and imprisoned at Guantanamo Bay without a trial.

Hamdan was accused of delivering weapons and other supplies to be used against American troops, and held for trial before a military commission. The U.S. government classified him an “unprivileged belligerent.” This means that, because he was not a member of a nation’s uniformed military, he did not have the right to engage in hostilities or offer aid to America’s enemies on the battlefield.

In April 2004, Hamdan petitioned for a writ of habeas corpus, maintaining that his imprisonment violated the common law of war and that the procedures used in his case violated the Uniform Code of Military Justice (UCMJ) and the Geneva Conventions. In Hamdi v. Rumsfeld, the Court had recently ruled that detainees at Guantanamo have the right to challenge their classification as enemy combatants and to challenge the government’s factual assertions before a neutral decision-maker. But before the federal district court ruled on his April petition, Hamdan received a hearing from a military tribunal, which designated him an enemy combatant. Citing security concerns, the government excluded Hamdan from certain parts of his military tribunal hearing.

According to UCMJ, the rules governing military commissions are generally the same as those that apply to courts martial. For example:

Military Commission Order No. 1, issued by President Bush on March 21, 2002, however, reflected some important differences from standard court martial rules: