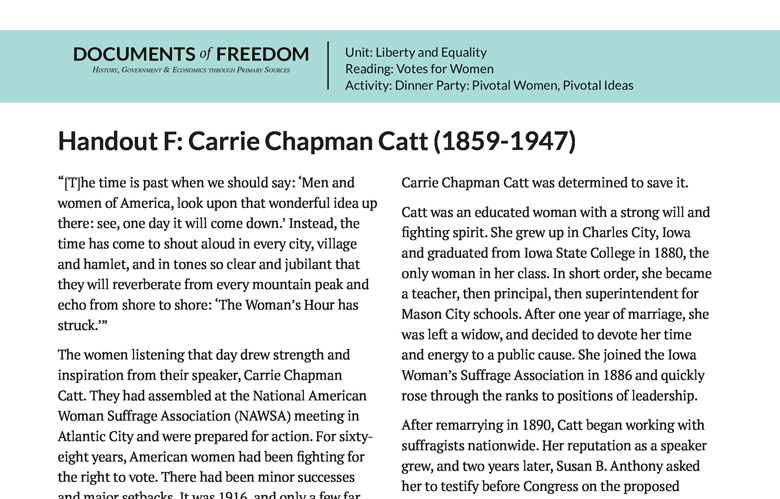 “[T]he time is past when we should say: ‘Men and women of America, look upon that wonderful idea up there: see, one day it will come down.’ Instead, the time has come to shout aloud in every city, village and hamlet, and in tones so clear and jubilant that they will reverberate from every mountain peak and echo from shore to shore: ‘The Woman’s Hour has struck.’”

The women listening that day drew strength and inspiration from their speaker, Carrie Chapman Catt. They had assembled at the National American Woman Suffrage Association (NAWSA) meeting in Atlantic City and were prepared for action. For sixtyeight years, American women had been fighting for the right to vote. There had been minor successes and major setbacks. It was 1916, and only a few far western states, such as Wyoming and Utah, had granted women the right to vote. Most women in the rest of the nation could have been jailed if they had even tried.

Over the years, the disjointed work of suffragist organizations had generated few productive results. Some leaders believed in attacking the issue first at the state level. Others believed the only solution was an amendment to the U.S. Constitution, and focused their energies on petitioning Congress. A few wanted to follow the example of English suffragists and took a militant approach: the National Woman’s Party, for example, orchestrated sit-ins and hunger strikes. Some of the most reserved suffragists spread word of their cause through organized afternoon teas and small parades.

The movement that began in the 1840s, with the first women’s rights convention in 1848 at Seneca Falls, New York, seemed to be failing by the early 1900s. Carrie Chapman Catt was determined to save it.

Catt was an educated woman with a strong will and fighting spirit. She grew up in Charles City, Iowa and graduated from Iowa State College in 1880, the only woman in her class. In short order, she became a teacher, then principal, then superintendent for Mason City schools. After one year of marriage, she was left a widow, and decided to devote her time and energy to a public cause. She joined the Iowa Woman’s Suffrage Association in 1886 and quickly rose through the ranks to positions of leadership.

After remarrying in 1890, Catt began working with suffragists nationwide. Her reputation as a speaker grew, and two years later, Susan B. Anthony asked her to testify before Congress on the proposed constitutional amendment. By 1900, Catt had been elected to succeed Anthony as president of the NAWSA. During her tenure, she became known as a strong leader, whose vision and ability to compromise strengthened the organization.

In 1904, the illness of her husband led Catt to resign her position. Devastated by his death the following year as well as that of Anthony in 1906, she retreated to her suffrage work overseas and spent the next nine years working as president of the International Woman Suffrage Alliance, which she had helped organize in 1902.
Catt remained a dynamic spokesperson for the woman’s suffrage movement. While she was abroad, the NAWSA (and consequently the movement) struggled under divided leadership. Catt returned home in 1915 to resume her position as president. A year later, at the 1916 Atlantic City convention, she unveiled a daring new strategy, which she dubbed the “Winning Plan.”

Catt’s Winning Plan contained a bold initiative. It called for a federal amendment to the United States Constitution as its ultimate goal, but it also encouraged the development of state and local initiatives. She wanted to attack the issue on all fronts. If a state offered equal voting rights, the women in that state should campaign for the federal amendment. If the state appeared open to the idea of voting rights, women should work together and organize at the state level. If not, women should devise smaller, local campaigns. What Catt realized was critical: all of these organizations would play a role in the drive for ratification.

The NAWSA adopted the strategy, and Catt traveled the country encouraging cooperative, persistent action. The Winning Plan clearly defined the goals of the NAWSA and, more importantly, the ways to achieve them. Catt provided an overall strategy and a role for each group in the push for women’s suffrage. In four years, her vision would become reality.

While establishing a base of state and local support, Catt approached congressional leaders with the proposed amendment. She impressed President Wilson and many members of Congress, and the NAWSA lobbied tirelessly. Catt made the decision to curb their petitions, however, while the country was embroiled in World War I.

The contributions that women made to the war on the home front may have helped NAWSA when it resumed its lobbying in 1919. The amendment passed in both houses in June, and President Wilson, who respected and admired Catt, came out in favor of the amendment. It moved quickly to the states for ratification.

Over the next year, state and local support became critical to the initiative’s success. Anti-suffragists organized rallies to persuade legislators to vote against the amendment. Some legislators left their states in order to prevent the necessary quorum. Without the minimum number of representatives present in order to vote, the amendment might stall or be defeated. In response, local suffrage associations monitored the referendum process to ensure its validity.

On August 24, 1920, Tennessee became the vital thirty-sixth state to ratify. Two days later—seventytwo years after the start of the suffrage movement— the Nineteenth Amendment was adopted:

The right of citizens of the United States to vote shall not be denied or abridged by the United States or by any State on account of sex. Congress shall have power to enforce this article by appropriate legislation.

Catt’s Winning Plan had won. “The Woman’s Hour” had struck.