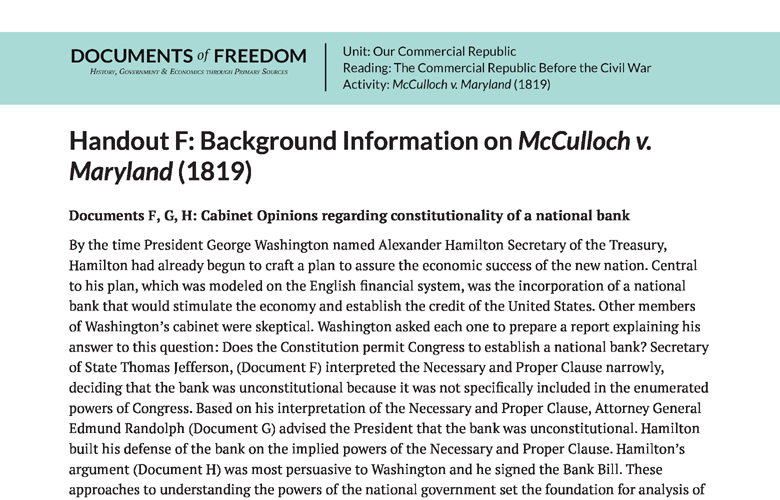 By the time President George Washington named Alexander Hamilton Secretary of the Treasury, Hamilton had already begun to craft a plan to assure the economic success of the new nation. Central to his plan, which was modeled on the English financial system, was the incorporation of a national bank that would stimulate the economy and establish the credit of the United States. Other members of Washington’s cabinet were skeptical. Washington asked each one to prepare a report explaining his answer to this question: Does the Constitution permit Congress to establish a national bank? Secretary of State Thomas Jefferson, (Document F) interpreted the Necessary and Proper Clause narrowly, deciding that the bank was unconstitutional because it was not specifically included in the enumerated powers of Congress. Based on his interpretation of the Necessary and Proper Clause, Attorney General Edmund Randolph (Document G) advised the President that the bank was unconstitutional. Hamilton built his defense of the bank on the implied powers of the Necessary and Proper Clause. Hamilton’s argument (Document H) was most persuasive to Washington and he signed the Bank Bill. These approaches to understanding the powers of the national government set the foundation for analysis of the constitutional limits on national power continuing into the present day.

In 1819 the United States had been a nation under the Constitution for barely a generation when an important case about federal power reached the Court. A National Bank had been established in 1791. When its initial twenty-year charter came up for renewal in 1811, Congress voted not to extend it. Then, following the nation’s brush with bankruptcy in the War of 1812, Congress established the second National Bank of the United States in 1816. Those who supported a National Bank maintained that it was necessary to control the amount of unregulated paper money issued by state banks. However, most states opposed branches of the National Bank within their borders. They did not want the National Bank competing with their own banks, and objected to the establishment of a National Bank as an unconstitutional exercise of Congress’s power.

The state of Maryland imposed a tax of $15,000/year on the National Bank, which cashier

James McCulloch of the Baltimore branch refused to pay. The case went to the Supreme Court.

Maryland argued that as a sovereign state, it had the power to tax any business within its borders. McCulloch’s attorneys argued that it was “necessary and proper” for Congress to establish a national bank in order to carry out its enumerated powers.

Chief Justice John Marshall wrote that the Necessary and Proper Clause provided for implied powers, including a power to establish the bank.

By the 1830s, the National Bank had experienced several phases of good and bad management, and had weathered charges of corruption. The Bank was a volatile political issue, with many supporters in the East and many detractors in the West and South. The 1828 election of Andrew Jackson as President brought the Bank’s most powerful enemy to the White House. He saw the Bank as a greedy monopoly dominated by a powerful elite and foreign interests. The Bank’s second charter was set to expire in 1836, but in 1832 Senator Henry Clay proposed re-chartering it early, explaining a number of benefits and winning approval of his bill in both Houses of Congress. However, Jackson’s view of the Bank is summarized in a February 19, 1932 letter to John Coffee: “Unless the corrupting monster should be shraven with its ill-gotten power, my veto will meet it frankly and fearlessly.” As promised, Jackson vetoed the bill. Congress could not muster the two-thirds majority needed to overturn the veto, so the bank’s charter expired in 1836 and was never renewed.

President George W. Bush signed the Adam Walsh Child Protection and Safety Act into law in 2006. The law required that sex offenders register their whereabouts periodically, created a national sex offender registry, and Section 4248 of the law provided for continued incarceration of certain offenders even after they had completed their criminal sentences. A federal judge had authority to civilly commit individuals who were in the federal prison system if it were proven that they continued to be sexually dangerous.

Just before Graydon Comstock was to have completed his 37-month sentence for receiving child pornography, U.S. Attorney General Alberto Gonzales certified that he remained a sexually dangerous person, which meant that he would not be released. Lower courts had ruled that Section 4248 of the law was unconstitutional, on the basis that it exceeded the constitutional power of Congress. Justice Breyer delivered the opinion of the Supreme Court, determining that the powers implied in the Necessary and Proper Clause built on themselves and granted Congress the power to enact such a law.