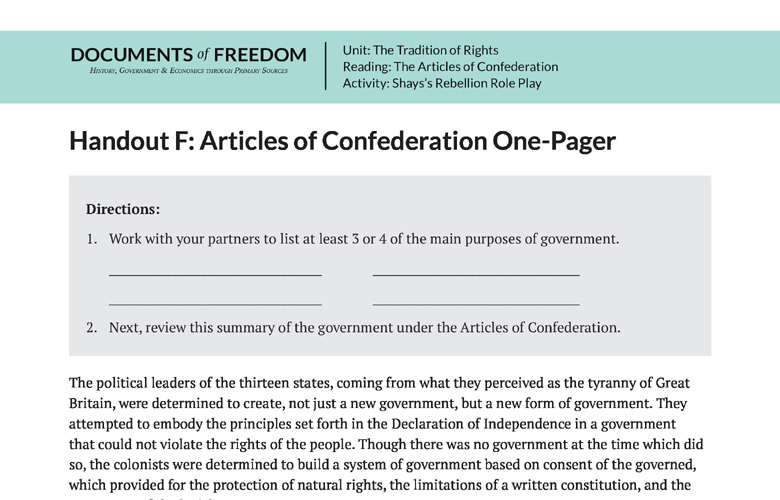 The political leaders of the thirteen states, coming from what they perceived as the tyranny of Great Britain, were determined to create, not just a new government, but a new form of government. They attempted to embody the principles set forth in the Declaration of Independence in a government that could not violate the rights of the people. Though there was no government at the time which did so, the colonists were determined to build a system of government based on consent of the governed, which provided for the protection of natural rights, the limitations of a written constitution, and the supremacy of the legislature.

Members of Congress worked from 1776 to 1777 to produce a plan for such a government, and it took the states about four more years of debate before all of them approved it. In 1781, the same year as the last major battle of the American Revolution, the Articles of Confederation became the first national government of the United States of America. In this constitution, the states made sure they could control the national government, acting on their fear of a central government that could abuse its powers and trample upon the rights of the people.

Under the Articles of Confederation, there was no executive branch and no national judicial system. Each state had one vote in the Confederation Congress, and nine of the thirteen states had to agree before any law could be passed. The main achievements of the government under this constitution were negotiating a favorable peace settlement to end the Revolutionary War, and organizing the orderly settlement of the Northwest Territory between the Ohio River and the Great Lakes.