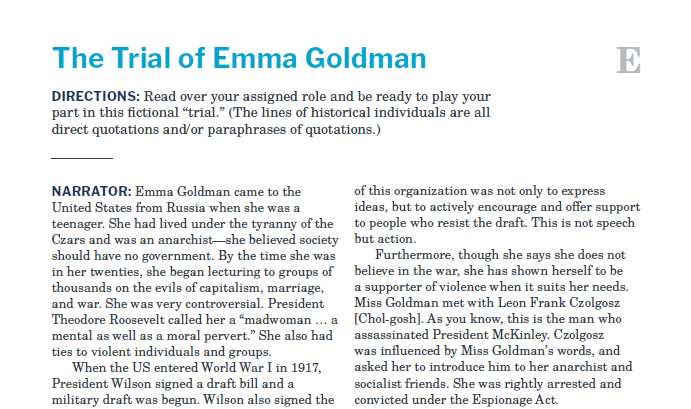 The Trial of Emma Goldman

Directions: Read over your assigned role and be ready to play your part in this fictional “trial.” (The lines of historical individuals are all direct quotations and/or paraphrases of quotations.)

NARRATOR: Emma Goldman came to the United States from Russia when she was a teenager. She had lived under the tyranny of the Czars and was an anarchist—she believed society should have no government. By the time she was in her twenties, she began lecturing to groups of thousands on the evils of capitalism, marriage, and war. She was very controversial. President Theodore Roosevelt called her a “madwoman … a mental as well as a moral pervert.” She also had ties to violent individuals and groups.

When the US entered World War I in 1917, President Wilson signed a draft bill and a military draft was begun. Wilson also signed the Espionage Act, which, among other things, made it a crime to resist the draft.

Goldman believed governments did not have the just power to wage wars. She believed a military draft was a form of slavery. To express her message, she founded the No Conscription League. On June 15, 1917, federal marshals entered and ransacked Goldman’s apartment. They found, among other papers, the list of names of people who subscribed to Mother Earth, a journal published by Goldman. Goldman and her partner were charged with conspiracy to resist the draft, a federal offense under the 1917 Espionage Act. She was tried by a jury and convicted. Her case has now been appealed to the Supreme Court.

JUDGE A: Is the government ready to make an opening statement?

US ATTORNEY: Yes, your honor. Miss Goldman’s arrest is justified. Because she was personally opposed to World War I, she worked to found the “No Conscription League.” The purpose of this organization was not only to express ideas, but to actively encourage and offer support to people who resist the draft. This is not speech but action.

Furthermore, though she says she does not believe in the war, she has shown herself to be a supporter of violence when it suits her needs. Miss Goldman met with Leon Frank Czolgosz [Chol-gosh]. As you know, this is the man who assassinated President McKinley. Czolgosz was influenced by Miss Goldman’s words, and asked her to introduce him to her anarchist and socialist friends. She was rightly arrested and convicted under the Espionage Act.

JUDGE A: Is the defense ready to make an opening statement?

ATTORNEY FOR MISS GOLDMAN, MS. ANN R. KIST: Yes, your honor. Emma is not a dangerous radical. She has done nothing more than share her ideas. She believes the pen is mightier than the sword, and abhors violence. She has won the admiration of people like George Orwell and John Dewey. Emma has been a constant victim of paranoid laws in the name of national security, as well as anti-immigrant harassment from private citizens. Now she is charged with conspiracy. How can there be a conspiracy? She has stated everything out in the open. And there is no proof she actually caused anyone to resist the draft.

Yes, some of the things she has said rightfully turn our stomachs. But that doesn’t change the fact that they are just words. And in America, we don’t put people in prison for their words. Even if those words, in this case, are questioning the constitutionality of the draft.

JUDGE B: Is the government ready to call its first witness?

US ATTORNEY: The United States calls Leon Frank Czolgosz. Mr. Czolgosz, can you tell us when you first met Miss Goldman?

CZOLGOSZ: She set me on fire when I heard her give a speech called “The Modern Phase of Anarchy.” She lectured about political assassination and the glory of martyrdom.

US ATTORNEY: And it was four months later that you shot and killed President McKinley, is that correct?

MS. KIST: Mr. Czolgosz, I am confused. Did Miss Goldman order you to kill the President?

MS. KIST: And did she assist you in any way in the assassination?

JUDGE D: You may step down.

US ATTORNEY: The United States calls President Woodrow Wilson. Mr. President, you signed the Espionage Act into law. Can you tell us the purpose of this law?

WILSON: The gravest threats against our national peace and safety have been uttered within our own borders. There are people pouring the poison of disloyalty into the very arteries of our national life. I urged Congress to enact such laws to save the honor and self-respect of the nation. Such creatures of passion, disloyalty, and anarchy must be crushed out.

MS. KIST: Mr. President, is there any proof that my client actually caused anyone to resist the draft?

JUDGE A: You may step down. [If assigned by your teacher, additional witnesses, or exhibits should be presented here.]

US ATTORNEY: The United States calls Emma Goldman to the stand. Miss Goldman, you defended the assassin Leon Czolgosz, didn’t you?

GOLDMAN: As an anarchist, I am opposed to violence. But if the people want to do away with assassins, they must do away with the conditions which produce murderers.

US ATTORNEY: You say you are opposed to violence, but didn’t you help a man try to assassinate a Carnegie Steel manager? You assisted in getting a pistol for the man who shot and wounded him, didn’t you?

GOLDMAN: I … insist on my right of free speech. If the police stop me, then it is up to them to explain why… As long as I live I must be a crusader. What I think, what I feel, I must speak. Not for a hundred, not for five hundred years will the principles of anarchy triumph. But what has that to do with it?

US ATTORNEY: I am confused about your definition of the word “speech.” Didn’t you offer to help people resist the draft? Is that speech, or action? Isn’t the entire purpose of the No Conscription League to undermine America’s efforts in World War I? You believe governments have no right to make war, don’t you?

GOLDMAN: Yes. In May 1917, I helped launch the No-Conscription League. We oppose all wars waged by capitalist governments. We believe that the militarization of America is an evil that far outweighs any good that may come from America’s participation in the war. We will resist conscription by every means in our power. If America had entered the war to make the world safe for democracy, she [America] must first make democracy safe in America.

US ATTORNEY: And when you distributed the No-Conscription League newsletter, you were trying to increase opposition to the draft in the United States, is that right?

JUDGE B: Ms. Kist, do you have any questions?

MS. KIST: You’ve been accused of having associations with violent people. What do you say to this?

EMMA GOLDMAN: As to killing rulers, it depends entirely on the position of the ruler. If it is the Russian Czar, I most certainly believe in dispatching him to where he belongs. If the ruler is as ineffectual as an American President, it is hardly worth the effort. There are, however, some potentates [rulers] I would kill by any and all means at my disposal. They are ignorance, superstition, and bigotry—the most sinister and tyrannical rulers on earth.

MS. KIST: And why did you write the things you did?

EMMA GOLDMAN: The people are asleep; they remain indifferent. They forge their own chains and do the bidding of their masters.…

MS. KIST: You maintain your innocence in this trial, then?

US ATTORNEY: There can be no question that Miss Goldman broke the law. The Espionage Act clearly states that it is a crime to “willfully cause or attempt to cause insubordination, disloyalty, mutiny, refusal of duty, in the military or naval forces of the United States, or … willfully obstruct the recruiting or enlistment service of the United States.” Her newsletter’s goal was undoubtedly to do just that. Congress has the constitutional power to raise an army and provide for it, and also to prevent people from interfering with it in time of war.

Furthermore, Miss Goldman is in the United States because we are gracious enough to have her. But she is an alien. The United States is justified in sending her back to Russia. It is ridiculous to think the United States must tolerate a non-citizen exercising her “blessings of liberty” by calling for and even working to bring about the destruction of the US.

MS. KIST: Yes, Miss Goldman’s ideas are shocking. But I am not asking you to like her. I am asking you to acknowledge that her words are protected by the First Amendment to the Constitution. Maybe she broke the law by disobeying the Espionage Act—I will discuss that later—but the Espionage Act is unconstitutional. The First Amendment says “Congress shall make no law … abridging the freedom of speech, or of the press, or of the right of the people peaceably to assemble.…” Notice that the amendment does NOT say “except when we are at war,” or “except when dangerous ideas are involved.” It says “NO LAW.”

The US attorney quoted a section of the Espionage Act, but s/he left out an important part. The Act says those actions “to the injury of the service or of the United States” are criminal. Where is the injury? The government has shown no evidence that my client actually harmed the interests of the United States in this war. There is no proof that my client’s speech caused anyone to actually resist the draft. She published out in the open, so there can be no conspiracy.

JUDGE D: The United States has the constitutional power to punish people who resist the selective draft law. Miss Goldman was charged with conspiracy to resist the draft, a federal offense under the 1917 Espionage Act. She had two arguments in her defense: First, there was no conspiracy because what she did was not secretive but out in the open. Second, there was no proof that she caused anyone to disobey the conscription law.

Both of her arguments are absolutely without merit. What Emma Goldman did was a crime, even if she didn’t succeed in her goal of getting people to resist the draft. This court finds her guilty.