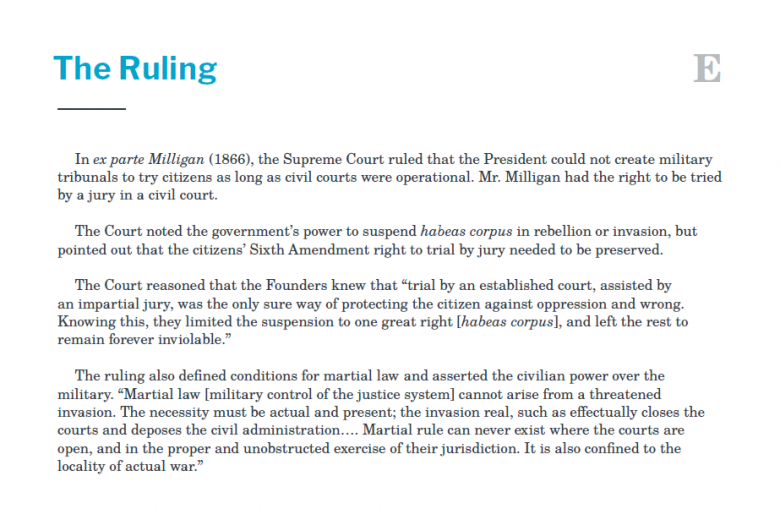 In ex parte Milligan (1866), the Supreme Court ruled that the President could not create military tribunals to try citizens as long as civil courts were operational. Mr. Milligan had the right to be tried by a jury in a civil court.

The Court noted the government’s power to suspend habeas corpus in rebellion or invasion, but pointed out that the citizens’ Sixth Amendment right to trial by jury needed to be preserved.

The Court reasoned that the Founders knew that “trial by an established court, assisted by an impartial jury, was the only sure way of protecting the citizen against oppression and wrong. Knowing this, they limited the suspension to one great right [habeas corpus], and left the rest to remain forever inviolable.”

The ruling also defined conditions for martial law and asserted the civilian power over the military. “Martial law [military control of the justice system] cannot arise from a threatened invasion. The necessity must be actual and present; the invasion real, such as effectually closes the courts and deposes the civil administration…. Martial rule can never exist where the courts are open, and in the proper and unobstructed exercise of their jurisdiction. It is also confined to the locality of actual war.”