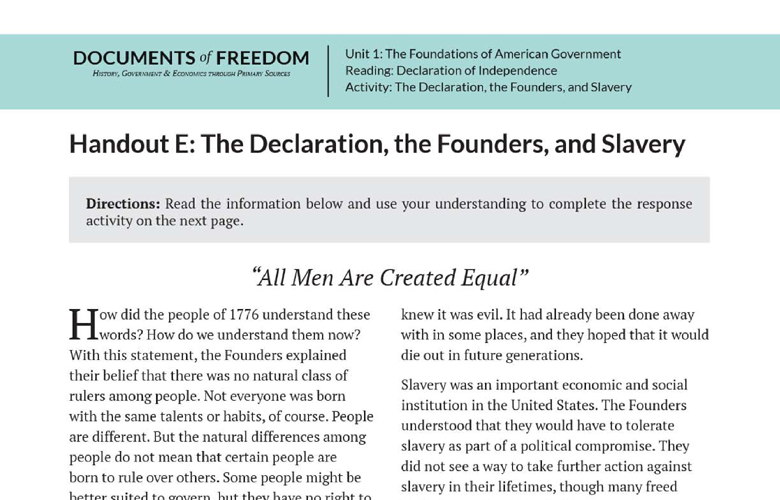 Handout E: The Declaration, the Founders, and Slavery

Directions: Read the information below and use your understanding to complete the response activity on the next page.

“All Men Are Created Equal”

With this statement, the Founders explained their belief that there was no natural class of rulers among people. Not everyone was born with the same talents or habits, of course. People are different. But the natural differences among people do not mean that certain people are born to rule over others. Some people might be better suited to govern, but they have no right to rule over others without their permission. This permission is called consent of the governed.

Some say that the Declaration’s authors did not mean to include everyone when they wrote “all men are created equal.” They say that Jefferson and the Continental Congress just meant to include white men who owned property. Jefferson and the Continental Congress did not believe that there was a natural class of rulers, and they asserted that the colonists had the same right to rule themselves as the people of England.

As a group, the Founders were conflicted about slavery. Many of them knew it was evil. It had already been done away with in some places, and they hoped that it would die out in future generations. Slavery was an important economic and social institution in the United States. The Founders understood that they would have to tolerate slavery as part of a political compromise.

They did not see a way to take further action against slavery in their lifetimes, though many freed their slaves after their deaths.

Over time, more and more Americans have come to see the Declaration as a moral argument against slavery. But this argument was not made by abolitionists during the Declaration’s time.

Select one quotation and write a response. How, if at all, does this information help you understand the topic of the Founders’ view on slavery?