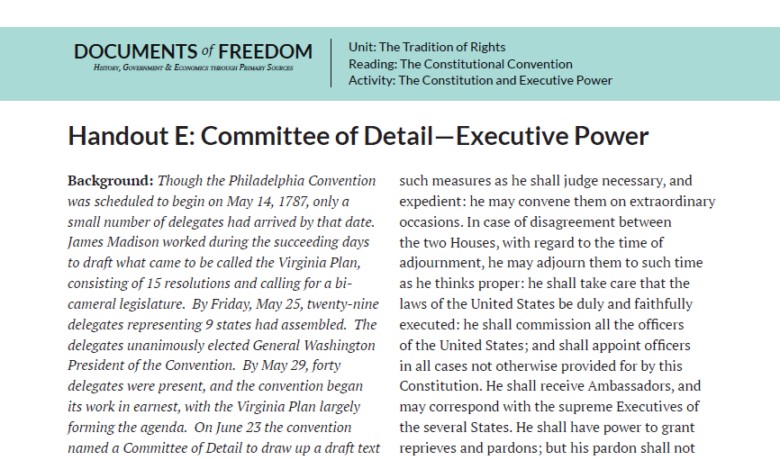 Background: Though the Philadelphia Convention was scheduled to begin on May 14, 1787, only a small number of delegates had arrived by that date. James Madison worked during the succeeding days to draft what came to be called the Virginia Plan, consisting of 15 resolutions and calling for a bicameral legislature. By Friday, May 25, twenty-nine delegates representing 9 states had assembled. The delegates unanimously elected General Washington President of the Convention. By May 29, forty delegates were present, and the convention began its work in earnest, with the Virginia Plan largely forming the agenda. On June 23 the convention named a Committee of Detail to draw up a draft text showing the agreements that had been reached up until that time, and then the convention adjourned until August 6. When the Committee of Detail presented its report to the convention on August 6, it formed the first draft of the U.S. Constitution. The sections below show the proposals regarding the executive power.

Sect. 2. He shall, from time to time, give information to the Legislature, of the state of the Union: he may recommend to their consideration such measures as he shall judge necessary, and expedient: he may convene them on extraordinary occasions. In case of disagreement between the two Houses, with regard to the time of adjournment, he may adjourn them to such time as he thinks proper: he shall take care that the laws of the United States be duly and faithfully executed: he shall commission all the officers of the United States; and shall appoint officers in all cases not otherwise provided for by this Constitution. He shall receive Ambassadors, and may correspond with the supreme Executives of the several States. He shall have power to grant reprieves and pardons; but his pardon shall not be pleadable in bar of an impeachment. He shall be commander in chief of the Army and Navy of the United States, and of the Militia of the several States. He shall, at stated times, receive for his services, a compensation, which shall neither be increased nor diminished during his continuance in office. Before he shall enter on the duties of his department, he shall take the following oath or affirmation, “I – solemnly swear, (or affirm) that I will faithfully execute the office of President of the United States of America.” He shall be removed from his office on impeachment by the House of Representatives, and conviction in the supreme Court, of treason, bribery, or corruption. In case of his removal as aforesaid, death, resignation, or disability to discharge the powers and duties of his office, the President of the Senate shall exercise those powers and duties, until another President of the United States be chosen, or until the disability of the President be removed.

Directions: Use the table below to show differences in the description of the presidency in the August 6 report and that in Article II of the U.S. Constitution. If the two documents are essentially the same, just write “same” or “similar” in both cells.