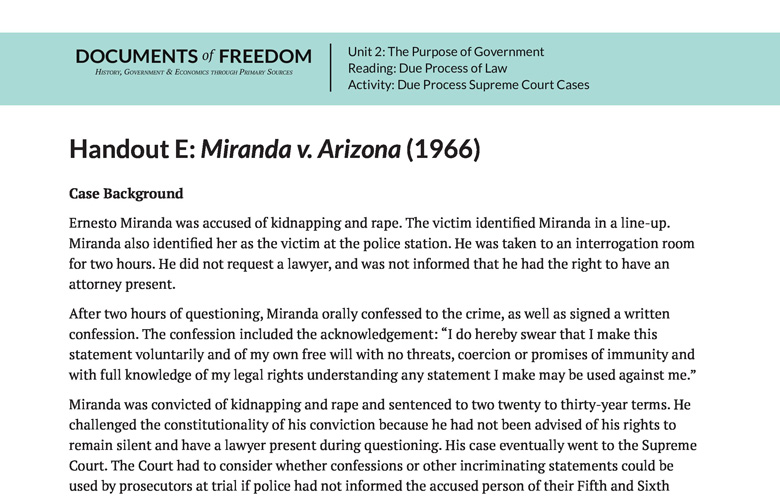 Ernesto Miranda was accused of kidnapping and rape. The victim identified Miranda in a line-up. Miranda also identified her as the victim at the police station. He was taken to an interrogation room for two hours. He did not request a lawyer, and was not informed that he had the right to have an attorney present.

After two hours of questioning, Miranda orally confessed to the crime, as well as signed a written confession. The confession included the acknowledgement: “I do hereby swear that I make this statement voluntarily and of my own free will with no threats, coercion or promises of immunity and with full knowledge of my legal rights understanding any statement I make may be used against me.”

Miranda was convicted of kidnapping and rape and sentenced to two twenty to thirty-year terms. He challenged the constitutionality of his conviction because he had not been advised of his rights to remain silent and have a lawyer present during questioning. His case eventually went to the Supreme Court. The Court had to consider whether confessions or other incriminating statements could be used by prosecutors at trial if police had not informed the accused person of their Fifth and Sixth Amendment rights.

It is obvious that such an interrogation environment is created for no purpose other than to subjugate the individual to the will of his examiner. This atmosphere carries its own badge of intimidation. To be sure, this is not physical intimidation, but it is equally destructive of human dignity…

An individual swept from familiar surroundings into police custody, surrounded by antagonistic forces, and subjected to the techniques of persuasion described above cannot be otherwise than under compulsion to speak…

[T]here can be no doubt that the Fifth Amendment privilege is available outside of criminal court proceedings and serves to protect persons in all settings in which their freedom of action is curtailed in any significant way from being compelled to incriminate themselves.

We have concluded that without proper safeguards the process of in-custody interrogation of persons suspected or accused of crime contains inherently compelling pressures which work to undermine the individual’s will to resist and to compel him to speak where he would not otherwise do so freely. In order to combat these pressures and to permit a full opportunity to exercise the privilege against self- incrimination, the accused must be adequately and effectively apprised of his rights and the exercise of those rights must be fully honored.

The Fifth Amendment privilege is so fundamental to our system of constitutional rule and the expedient of giving an adequate warning as to the availability of the privilege so simple, we will not pause to inquire in individual cases whether the defendant was aware of his rights without a warning being given…

In dealing with statements obtained through interrogation, we do not purport to find all confessions inadmissible. Confessions remain a proper element in law enforcement. Any statement given freely and voluntarily without any compelling influences is, of course, admissible in evidence… Volunteered statements of any kind are not barred by the Fifth Amendment and their admissibility is not affected by our holding today.

An accused, arrested on probable cause, may blurt out a confession which will be admissible. …
Yet, under the Court’s rule, if the police ask him a single question… his response, if there is one, has somehow been compelled, even if the accused has been clearly warned of his right to remain silent. Common sense informs us to the contrary.

[I]f the defendant may not answer without a warning a question such as “Where were you last night?” without having his answer be a compelled one, how can the Court ever accept his negative answer to the question of whether he wants to consult his retained counsel or counsel whom the court will appoint? And why, if counsel is present and the accused nevertheless confesses, or counsel tells the accused to tell the truth and that is what the accused does, is the situation any less coercive insofar as the accused is concerned?