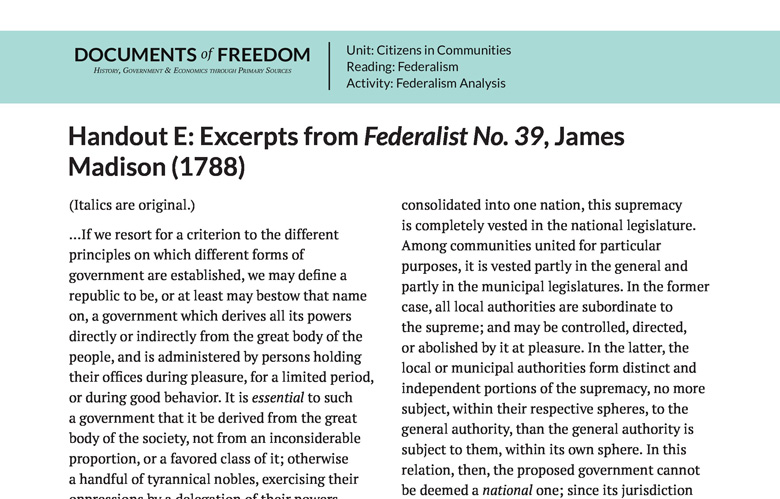 …If we resort for a criterion to the different principles on which different forms of government are established, we may define a republic to be, or at least may bestow that name on, a government which derives all its powers directly or indirectly from the great body of the people, and is administered by persons holding their offices during pleasure, for a limited period, or during good behavior. It is essential to such a government that it be derived from the great body of the society, not from an inconsiderable proportion, or a favored class of it; otherwise a handful of tyrannical nobles, exercising their oppressions by a delegation of their powers, might aspire to the rank of republicans, and claim for their government the honorable title of republic. It is sufficient for such a government that the persons administering it be appointed, either directly or indirectly, by the people; and that they hold their appointments by either of the tenures just specified; otherwise every government in the United States, as well as every other popular government that has been or can be well organized or well executed, would be degraded from the republican character…

[I]f the government be national with regard to the operation of its powers, it changes its aspect again when we contemplate it in relation to the extent of its powers. The idea of a national government involves in it, not only an authority over the individual citizens, but an indefinite supremacy over all persons and things, so far as they are objects of lawful government. Among a people consolidated into one nation, this supremacy is completely vested in the national legislature. Among communities united for particular purposes, it is vested partly in the general and partly in the municipal legislatures. In the former case, all local authorities are subordinate to the supreme; and may be controlled, directed, or abolished by it at pleasure. In the latter, the local or municipal authorities form distinct and independent portions of the supremacy, no more subject, within their respective spheres, to the general authority, than the general authority is subject to them, within its own sphere. In this relation, then, the proposed government cannot be deemed a national one; since its jurisdiction extends to certain enumerated objects only, and leaves to the several States a residuary and inviolable sovereignty over all other objects. It is true that in controversies relating to the boundary between the two jurisdictions, the tribunal which is ultimately to decide, is to be established under the general government. But this does not change the principle of the case. The decision is to be impartially made, according to the rules of the Constitution; and all the usual and most effectual precautions are taken to secure this impartiality. Some such tribunal is clearly essential to prevent an appeal to the sword and a dissolution of the compact; and that it ought to be established under the general rather than under the local governments, or, to speak more properly, that it could be safely established under the first alone, is a position not likely to be combated…