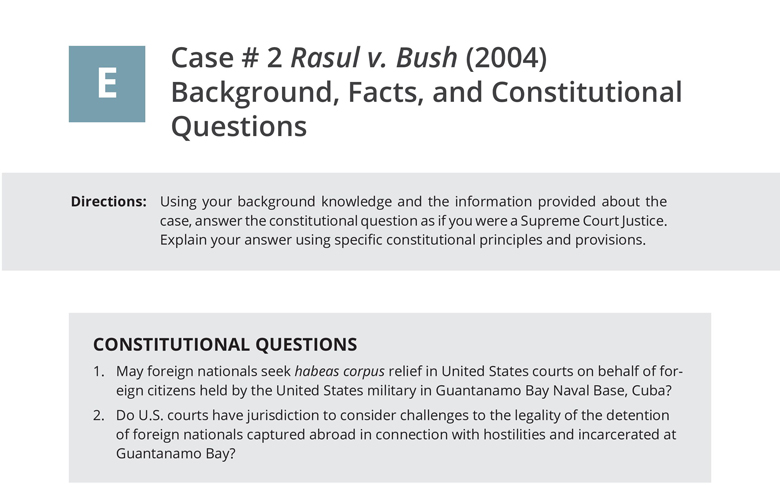 During the U.S. invasion of Afghanistan in 2001, the U.S. military captured or arrested various individuals believed to be fighting for the Taliban or al Qaeda, and classified them as enemy combatants to be held for interrogation. Without being informed of the charges against them, tried, or given access to lawyers, they were incarcerated indefinitely at the U.S. detention facility at Guantanamo Bay, Cuba. The cases of fourteen foreign nationals who petitioned for a writ of habeas corpus were combined under Rasul v. Bush. Shafiq Rasul and the other petitioners were citizens of Britain, Australia, or Kuwait, none of which were at war with the U.S. They denied that they were engaged in acts of aggression against the U.S., and they maintained that the U.S. Constitution’s writ of habeas corpus protection applied to them because the U.S. had full control over the Guantanamo military base.

The U.S. government, relying on the precedent set in Johnson v. Eisentrager (1950), argued that American courts did not have jurisdiction over the Guantanamo detention cases since the individuals were not U.S. citizens and were imprisoned in territory over which the U.S. did not have sovereignty.