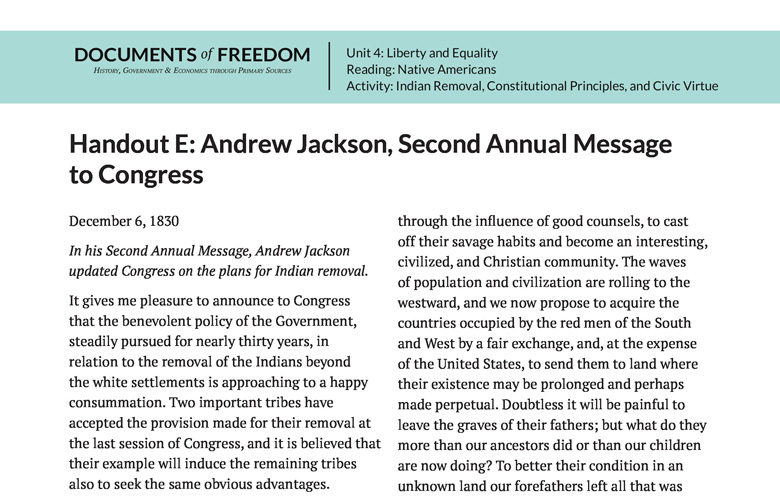 In his Second Annual Message, Andrew Jackson updated Congress on the plans for Indian removal.

It gives me pleasure to announce to Congress that the benevolent policy of the Government, steadily pursued for nearly thirty years, in relation to the removal of the Indians beyond the white settlements is approaching to a happy consummation. Two important tribes have accepted the provision made for their removal at the last session of Congress, and it is believed that their example will induce the remaining tribes also to seek the same obvious advantages.

The consequences of a speedy removal will be important to the United States, to individual States, and to the Indians themselves. . . By opening the whole territory between Tennessee on the north and Louisiana on the south to the settlement of the whites it will incalculably strengthen the southwestern frontier and render the adjacent States strong enough to repel future invasions without remote aid. It will relieve the whole State of Mississippi and the western part of Alabama of Indian occupancy, and enable those States to advance rapidly in population, wealth, and power. It will separate the Indians from immediate contact with settlements of whites; free them from the power of the States; enable them to pursue happiness in their own way and under their own rude institutions; will retard the progress of decay, which is lessening their numbers, and perhaps cause them gradually, under the protection of the Government and through the influence of good counsels, to cast off their savage habits and become an interesting, civilized, and Christian community. The waves of population and civilization are rolling to the westward, and we now propose to acquire the countries occupied by the red men of the South and West by a fair exchange, and, at the expense of the United States, to send them to land where their existence may be prolonged and perhaps made perpetual. Doubtless it will be painful to leave the graves of their fathers; but what do they more than our ancestors did or than our children are now doing? To better their condition in an unknown land our forefathers left all that was dear in earthly objects.

What good man would prefer a country covered with forests and ranged by a few thousand savages to our extensive Republic, studded with cities, towns, and prosperous farms embellished with all the improvements which art can devise or industry execute, occupied by more than 12,000,000 happy people, and filled with all the blessings of liberty, civilization and religion?

Can it be cruel in this Government when, by events which it can not control, the Indian is made discontented in his ancient home, to purchase his lands, to give him a new and extensive territory, to pay the expense of his removal, and support him a year in his new abode? How many thousands of our own people would gladly embrace the opportunity of removing to the West on such conditions! If the offers made to the Indians were extended to them, they would be hailed with gratitude and joy.

And is it supposed that the wandering savage has a stronger attachment to his home than the settled, civilized Christian? Is it more afflicting to him to leave the graves of his fathers than it is to our brothers and children? Rightly considered, the policy of the General Government toward the red man is not only liberal, but generous. He is unwilling to submit to the laws of the States and mingle with their population. To save him from this alternative, or perhaps utter annihilation, the General Government kindly offers him a new home, and proposes to pay the whole expense of his removal and settlement.