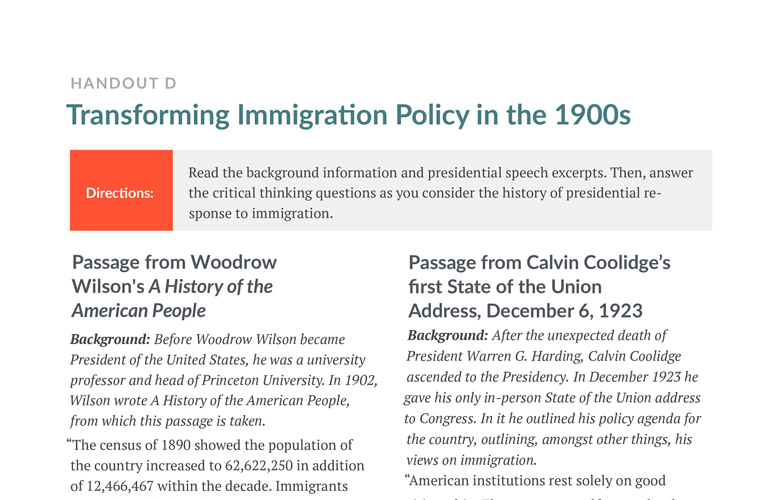 Directions: Read the background information and presidential speech excerpts. Then, answer the critical thinking questions as you consider the history of presidential response to immigration.

Passage from Woodrow Wilson’s A History of the American People

Background: Before Woodrow Wilson became President of the United States, he was a university professor and head of Princeton University. In 1902, Wilson wrote A History of the American People, from which this passage is taken.

“The census of 1890 showed the population of the country increased to 62,622,250 in addition of 12,466,467 within the decade. Immigrants poured steadily in as before, but with an alteration of stock which students of affairs marked with uneasiness. Throughout the century men of the sturdy stocks of the north of Europe had made up the main strain of foreign blood which was every year added to the vital working force of the country, or else men of the Latin-Gallic stocks of France and northern Italy; but now there came multitudes of men of the lowest class from the south of Italy and men of the meaner sort out of Hungary and Poland, men out of the ranks where there was neither skill nor energy nor any initiative of quick intelligence; and they came in numbers which increased from year to year, as if the countries of the south of Europe were disburdening themselves of the more sordid and hapless elements of their population, the men whose standards of life and of work were such as American workmen had never dreamed of hitherto.”

Background: After the unexpected death of President Warren G. Harding, Calvin Coolidge ascended to the Presidency. In December 1923 he gave his only in-person State of the Union address to Congress. In it he outlined his policy agenda for the country, outlining, amongst other things, his views on immigration.

“American institutions rest solely on good citizenship. They were created by people who had a background of self-government. New arrivals should be limited to our capacity to absorb them into the ranks of good citizenship. America must be kept American. For this purpose, it is necessary to continue a policy of restricted immigration. It would be well to make such immigration of a selective nature with some inspection at the source, and based either on a prior census or upon the record of naturalization. Either method would insure the admission of those with the largest capacity and best intention of becoming citizens. I am convinced that our present economic and social conditions warrant a limitation of those to be admitted. We should find additional safety in a law requiring the immediate registration of all aliens. Those who do not want to be partakers of the American spirit ought not to settle in America.”

Background: In 1952, President Harry S. Truman vetoed H.R. 5678, the Immigration and Nationality Act, which continued to place limits on immigration from certain countries. Truman’s veto was overridden by Congress and became law. This passage is from President Truman’s statement explaining the reasons for his veto.

“Today, we are ‘protecting’ ourselves, as we were in 1924, against being flooded by immigrants from Eastern Europe. This is fantastic. The countries of Eastern Europe have fallen under the communist yoke–they are silenced, fenced off by barbed wire and minefields–no one passes their borders but at the risk of his life. We do not need to be protected against immigrants from these countries–on the contrary we want to stretch out a helping hand, to save those who have managed to flee into Western Europe, to succor those who are brave enough to escape from barbarism, to welcome and restore them against the day when their countries will, as we hope, be free again. But this we cannot do, as we would like to do, because the quota for Poland is only 6,500, as against the 138,000 exiled Poles, all over Europe, who are asking to come to these shores; because the quota for the now subjugated Baltic countries is little more than 700–against the 23,000 Baltic refugees imploring us to admit them to a new life here; because the quota for Rumania is only 289, and some 30,000 Rumanians, who have managed to escape the labor camps and the mass deportations of their Soviet masters, have asked our help. These are only a few examples of the absurdity, the cruelty of carrying over into this year of 1952 the isolationist limitations of our 1924 law.

In no other realm of our national life are we so hampered and stultified by the dead hand of the past, as we are in this field of immigration. We do not limit our cities to their 1920 boundaries–we do not hold our corporations to their 1920 capitalizations–we welcome progress and change to meet changing conditions in every sphere of life, except in the field of immigration.”

Background: In 1965, President Lyndon Johnson signed new immigration reforms into law. This passage is taken from his speech given at the signing ceremony.

“This bill says simply that from this day forth those wishing to immigrate to America shall be admitted on the basis of their skills and their close relationship to those already here. This is a simple test, and it is a fair test. Those who can contribute most to this country—to its growth, to its strength, to its spirit—will be the first that are admitted to this land. The fairness of this standard is so self-evident that we may well wonder that it has not always been applied. Yet the fact is that for over four decades the immigration policy of the United States has been twisted and has been distorted by the harsh injustice of the national origins quota system.

Under that system the ability of new immigrants to come to America depended upon the country of their birth. Only 3 countries were allowed to supply 70 percent of all the immigrants. Families were kept apart because a husband or a wife or a child had been born in the wrong place. Men of needed skill and talent were denied entrance because they came from southern or eastern Europe or from one of the developing continents. This system violated the basic principle of American democracy–the principle that values and rewards each man on the basis of his merit as a man. It has been un-American in the highest sense, because it has been untrue to the faith that brought thousands to these shores even before we were a country.

Today, with my signature, this system is abolished.”