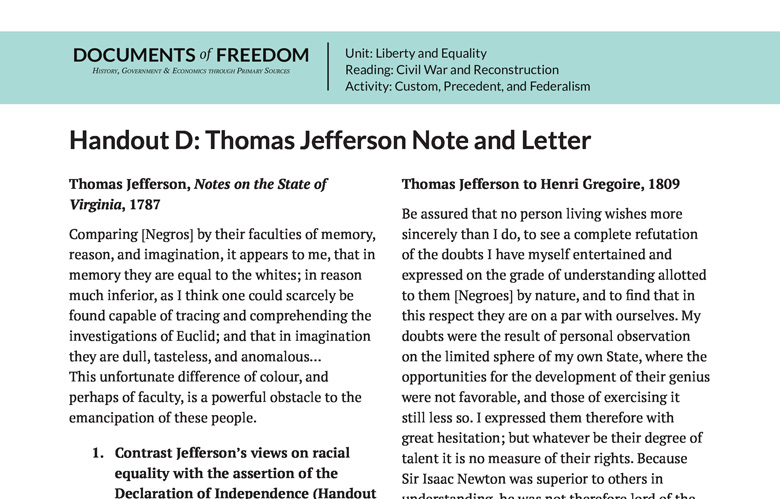 Thomas Jefferson, Notes on the State of Virginia, 1787

Comparing [Negros] by their faculties of memory, reason, and imagination, it appears to me, that in memory they are equal to the whites; in reason much inferior, as I think one could scarcely be found capable of tracing and comprehending the investigations of Euclid; and that in imagination they are dull, tasteless, and anomalous… This unfortunate difference of colour, and perhaps of faculty, is a powerful obstacle to the emancipation of these people.

Be assured that no person living wishes more sincerely than I do, to see a complete refutation of the doubts I have myself entertained and expressed on the grade of understanding allotted to them [Negroes] by nature, and to find that in this respect they are on a par with ourselves. My doubts were the result of personal observation on the limited sphere of my own State, where the opportunities for the development of their genius were not favorable, and those of exercising it still less so. I expressed them therefore with great hesitation; but whatever be their degree of talent it is no measure of their rights. Because Sir Isaac Newton was superior to others in understanding, he was not therefore lord of the person or property of others. On this subject they are gaining daily in the opinions of nations, and hopeful advances are making towards their reestablishment on an equal footing with the other colors of the human family.