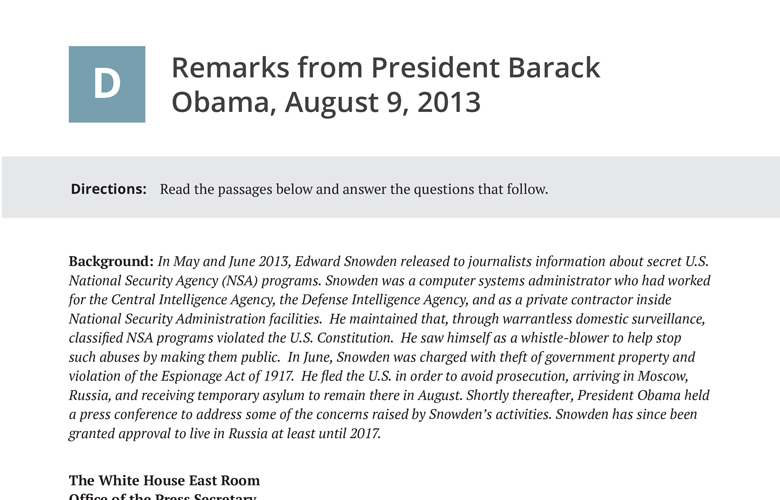 Directions: Read the passages below and answer the questions that follow.

Background: In May and June 2013, Edward Snowden released to journalists information about secret U.S. National Security Agency (NSA) programs. Snowden was a computer systems administrator who had worked for the Central Intelligence Agency, the Defense Intelligence Agency, and as a private contractor inside National Security Administration facilities. He maintained that, through warrantless domestic surveillance, classified NSA programs violated the U.S. Constitution. He saw himself as a whistle-blower to help stop such abuses by making them public. In June, Snowden was charged with theft of government property and violation of the Espionage Act of 1917. He fled the U.S. in order to avoid prosecution, arriving in Moscow, Russia, and receiving temporary asylum to remain there in August. Shortly thereafter, President Obama held a press conference to address some of the concerns raised by Snowden’s activities. Snowden has since been granted approval to live in Russia at least until 2017.

The White House East Room
Office of the Press Secretary
For Immediate Release
August 09, 2013; 3:09 P.M. EDT
Remarks by the President in a Press Conference

THE PRESIDENT: Good afternoon, everybody. Please have a seat.

Over the past few weeks, I’ve been talking about what I believe should be our number-one priority as a country—building a better bargain for the middle class and for Americans who want to work their way into the middle class. At the same time, I’m focused on my number-one responsibility as Commander-in-Chief, and that’s keeping the American people safe. And in recent days, we’ve been reminded once again about the threats to our nation. As I said at the National Defense University back in May, in meeting those threats we have to strike the right balance between protecting our security and preserving our freedoms. And as part of this rebalancing, I called for a review of our surveillance programs. Unfortunately, rather than an orderly and lawful process to debate these issues and come up with appropriate reforms, repeated leaks of classified information have initiated the debate in a very passionate, but not always fully informed way.

Now, keep in mind that as a senator, I expressed a healthy skepticism about these programs, and as President, I’ve taken steps to make sure they have strong oversight by all three branches of government and clear safeguards to prevent abuse and protect the rights of the American people. But given the history of abuse by governments, it’s right to ask questions about surveillance—particularly as technology is reshaping every aspect of our lives.

I’m also mindful of how these issues are viewed overseas, because American leadership around the world depends upon the example of American democracy and American openness—because what makes us different from other countries is not simply our ability to secure our nation, it’s the way we do it—with open debate and democratic process.

In other words, it’s not enough for me, as President, to have confidence in these programs. The American people need to have confidence in them as well. And that’s why, over the last few weeks, I’ve consulted members of Congress who come at this issue from many different perspectives. I’ve asked the Privacy and Civil Liberties Oversight Board to review where our counterterrorism efforts and our values come into tension, and I directed my national security team to be more transparent and to pursue reforms of our laws and practices.

And so, today, I’d like to discuss four specific steps—not all inclusive, but some specific steps that we’re going to be taking very shortly to move the debate forward.

First, I will work with Congress to pursue appropriate reforms to Section 215 of the Patriot Act—the program that collects telephone records. As I’ve said, this program is an important tool in our effort to disrupt terrorist plots. And it does not allow the government to listen to any phone calls without a warrant. But given the scale of this program, I understand the concerns of those who would worry that it could be subject to abuse…

For instance, we can take steps to put in place greater oversight, greater transparency, and constraints on the use of this authority. So I look forward to working with Congress to meet those objectives.

Second, I’ll work with Congress to improve the public’s confidence in the oversight conducted by the Foreign Intelligence Surveillance Court, known as the FISC. The FISC was created by Congress to provide judicial review of certain intelligence activities so that a federal judge must find that our actions are consistent with the Constitution. However, to build greater confidence, I think we should consider some additional changes to the FISC.

…while I’ve got confidence in the court and I think they’ve done a fine job, I think we can provide greater assurances that the court is looking at these issues from both perspectives—security and privacy.

So, specifically, we can take steps to make sure civil liberties concerns have an independent voice in appropriate cases by ensuring that the government’s position is challenged by an adversary.

Number three, we can, and must, be more transparent. …So at my direction, the Department of Justice will make public the legal rationale for the government’s collection activities under Section 215 of the Patriot Act. The NSA is taking steps to put in place a full-time civil liberties and privacy officer, and released information that details its mission, authorities, and oversight. And finally, the intelligence community is creating a website that will serve as a hub for further transparency, and this will give Americans and the world the ability to learn more about what our intelligence community does and what it doesn’t do, how it carries out its mission, and why it does so.

Fourth, we’re forming a high-level group of outside experts to review our entire intelligence and communications technologies. We need new thinking for a new era. We now have to unravel terrorist plots by finding a needle in the haystack of global telecommunications. And meanwhile, technology has given governments—including our own—unprecedented capability to monitor communications.

So I am tasking this independent group to step back and review our capabilities—particularly our surveillance technologies. And they’ll consider how we can maintain the trust of the people, how we can make sure that there absolutely is no abuse in terms of how these surveillance technologies are used, ask how surveillance impacts our foreign policy—particularly in an age when more and more information is becoming public. And they will provide an interim report in 60 days and a final report by the end of this year, so that we can move forward with a better understanding of how these programs impact our security, our privacy, and our foreign policy.

So all these steps are designed to ensure that the American people can trust that our efforts are in line with our interests and our values. And to others around the world, I want to make clear once again that America is not interested in spying on ordinary people. Our intelligence is focused, above all, on finding the information that’s necessary to protect our people, and—in many cases—protect our allies.

It’s true we have significant capabilities. What’s also true is we show a restraint that many governments around the world don’t even think to do, refuse to show—and that includes, by the way, some of America’s most vocal critics. We shouldn’t forget the difference between the ability of our government to collect information online under strict guidelines and for narrow purposes, and the willingness of some other governments to throw their own citizens in prison for what they say online.

And let me close with one additional thought. The men and women of our intelligence community work every single day to keep us safe because they love this country and believe in our values. They’re patriots. And I believe that those who have lawfully raised their voices on behalf of privacy and civil liberties are also patriots who love our country and want it to live up to our highest ideals. So this is how we’re going to resolve our differences in the United States—through vigorous public debate, guided by our Constitution, with reverence for our history as a nation of laws, and with respect for the facts.