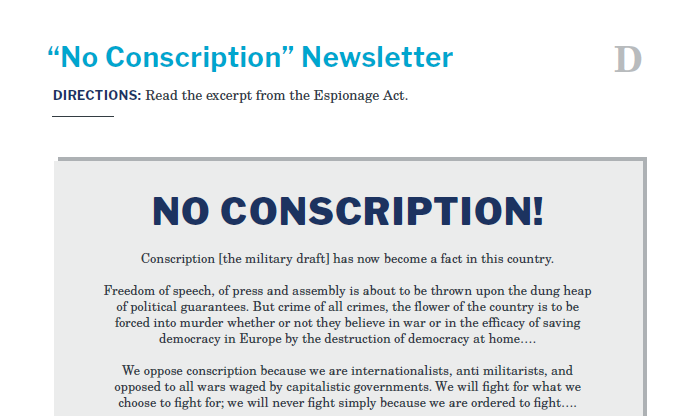 Directions: Read the excerpt from the Espionage Act.

Conscription [the military draft] has now become a fact in this country.

Freedom of speech, of press and assembly is about to be thrown upon the dung heap of political guarantees. But crime of all crimes, the flower of the country is to be forced into murder whether or not they believe in war or in the efficacy of saving democracy in Europe by the destruction of democracy at home….

We oppose conscription because we are internationalists, anti militarists, and opposed to all wars waged by capitalistic governments. We will fight for what we choose to fight for; we will never fight simply because we are ordered to fight….

We will resist conscription by every means in our power, and we will sustain those who, for similar reasons, refuse to be conscripted.

We are not unmindful of the difficulties in our way … [but] we feel confident in arousing thousands of people who are conscientious objectors to the murder of their fellowmen and to whom a principle represents the most vital thing in life.

Help us to give assistance to those who come in conflict with the government.

Help us to publish literature against militarism and against conscription.