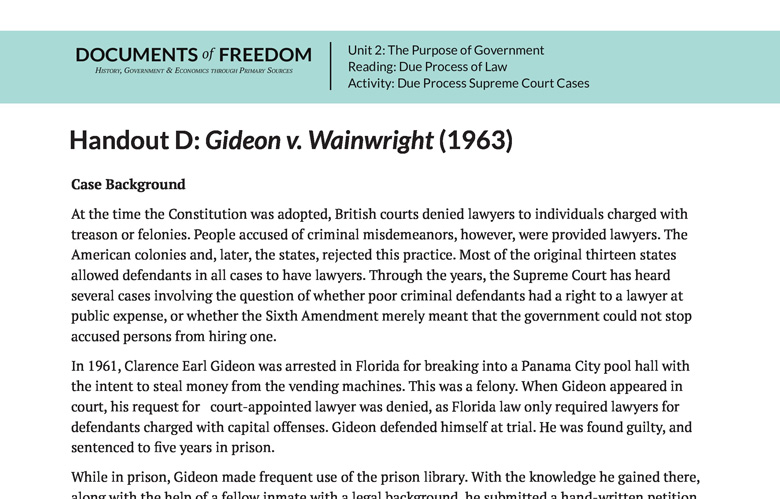 At the time the Constitution was adopted, British courts denied lawyers to individuals charged with treason or felonies. People accused of criminal misdemeanors, however, were provided lawyers. The American colonies and, later, the states, rejected this practice. Most of the original thirteen states allowed defendants in all cases to have lawyers. Through the years, the Supreme Court has heard several cases involving the question of whether poor criminal defendants had a right to a lawyer at public expense, or whether the Sixth Amendment merely meant that the government could not stop accused persons from hiring one.

In 1961, Clarence Earl Gideon was arrested in Florida for breaking into a Panama City pool hall with the intent to steal money from the vending machines. This was a felony. When Gideon appeared in court, his request for court-appointed lawyer was denied, as Florida law only required lawyers for defendants charged with capital offenses. Gideon defended himself at trial. He was found guilty, and sentenced to five years in prison.

While in prison, Gideon made frequent use of the prison library. With the knowledge he gained there, along with the help of a fellow inmate with a legal background, he submitted a hand-written petition to the Supreme Court. In his petition, he challenged the constitutionality of his conviction, as he had not been able to have the assistance of counsel for his defense.

Since 1942, when Betts v. Brady… was decided by a divided Court, the problem of a defendant’s federal constitutional right to counsel has been a continuing source of controversy and litigation in both state and federal courts…

We accept Betts v. Brady’s assumption, based as it was on our prior cases, that a provision of the Bill of Rights, which is “fundamental and essential to a fair trial” is made obligatory upon the States by the Fourteenth Amendment. We think the Court in Betts was wrong, however, in concluding that the Sixth Amendment’s guarantee of counsel is not one of these fundamental rights.

[R]eason and reflection require us to recognize that in our adversary system of criminal justice, any person haled into court, who is too poor to hire a lawyer, cannot be assured a fair trial unless counsel is provided for him. This seems to us to be an obvious truth. Governments… spend vast sums of money to… try defendants accused of crimes… Similarly, there are few defendants charged with crime, few indeed, who fail to hire the best lawyers they can get to prepare and present their defenses. That government hires lawyers to prosecute and defendants who have the money hire lawyers to defend are the strongest indications of the widespread belief that lawyers in criminal courts are necessities, not luxuries.

The Court in Betts v. Brady departed from the sound wisdom upon which the Court’s holding in Powell v. Alabama rested. Florida, supported by two other States, has asked that Betts v. Brady be left intact. Twenty-two states, as friends of the Court, argue that Betts was “an anachronism when handed down” and that it should now be overruled. We agree.