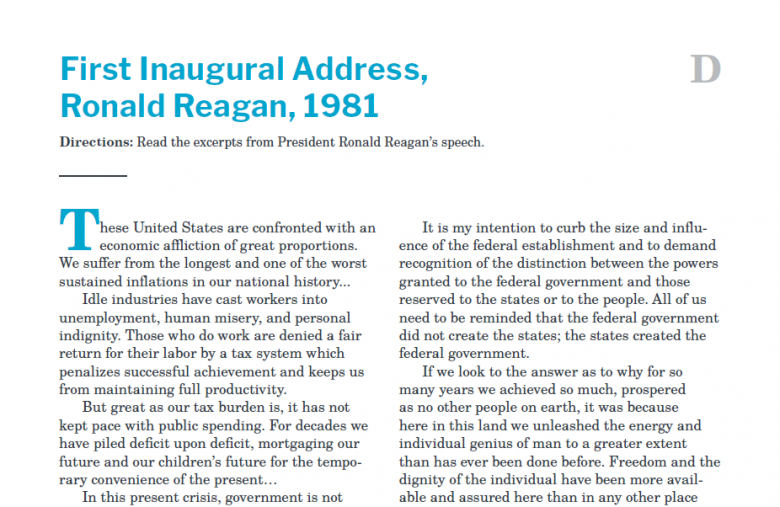 These United States are confronted with an economic affliction of great proportions. We suffer from the longest and one of the worst sustained inflations in our national history…

Idle industries have cast workers into unemployment, human misery, and personal indignity. Those who do work are denied a fair return for their labor by a tax system which penalizes successful achievement and keeps us from maintaining full productivity.

But great as our tax burden is, it has not kept pace with public spending. For decades we have piled deficit upon deficit, mortgaging our future and our children’s future for the temporary convenience of the present…

In this present crisis, government is not the solution to our problem; government is the problem. From time to time we’ve been tempted to believe that society has become too complex to be managed by self-rule, that government by an elite group is superior to government for, by, and of the people. Well, if no one among us is capable of governing himself, then who among us has the capacity to govern someone else?…

So, as we begin, let us take inventory. We are a nation that has a government—not the other way around. And this makes us special among the nations of the Earth. Our government has no power except that granted it by the people. It is time to check and reverse the growth of government, which shows signs of having grown beyond the consent of the governed.

If we look to the answer as to why for so many years we achieved so much, prospered as no other people on earth, it was because here in this land we unleashed the energy and individual genius of man to a greater extent than has ever been done before. Freedom and the dignity of the individual have been more available and assured here than in any other place on earth. The price for this freedom at times has been high, but we have never been unwilling to pay the price.

It is no coincidence that our present troubles parallel and are proportionate to the intervention and intrusion in our lives that result from unnecessary and excessive growth of government. …So, with all the creative energy at our command, let us begin an era of national renewal. Let us renew our determination, our courage, and our strength. And let us renew our faith and our hope.