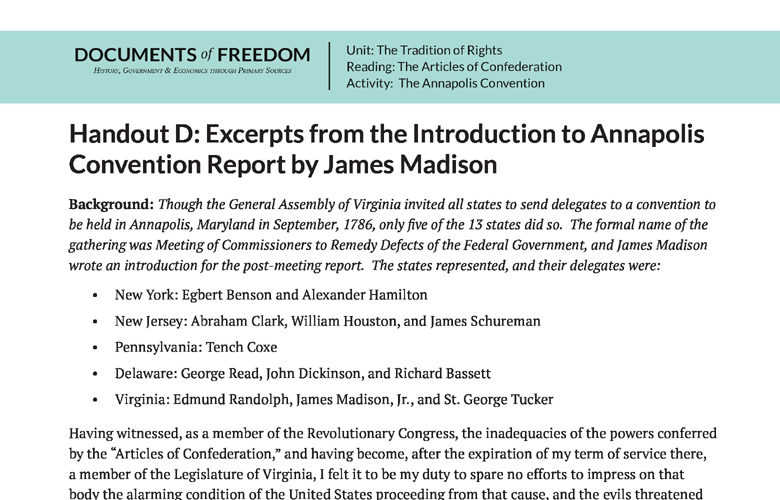 Handout D: Excerpts from the Introduction to Annapolis Convention Report by James Madison

Background: Though the General Assembly of Virginia invited all states to send delegates to a convention to be held in Annapolis, Maryland in September, 1786, only five of the 13 states did so. The formal name of the gathering was Meeting of Commissioners to Remedy Defects of the Federal Government, and James Madison wrote an introduction for the post-meeting report. The states represented, and their delegates were:

Having witnessed, as a member of the Revolutionary Congress, the inadequacies of the powers conferred by the “Articles of Confederation,” and having become, after the expiration of my term of service there, a member of the Legislature of Virginia, I felt it to be my duty to spare no efforts to impress on that body the alarming condition of the United States proceeding from that cause, and the evils threatened by delay, in applying a remedy. With this, propositions were made vesting in Congress the necessary powers to regulate trade, then suffering under the monopolizing power abroad, and State collisions at home… The propositions, though received with favorable attention, and at one moment agreed to in a crippled form, were finally frustrated, or, rather, abandoned. …The proposition invited the other states to concur with Virginia in a convention of deputies commissioned to devise and report a uniform system of commercial regulations. …The convention proposed took place at Annapolis, in August, 1786. Being, however, very partially attended…they determined to waive the object for which they were appointed, and recommend a convention, with enlarged powers, to be held the year following, in the city of Philadelphia. The Legislature of Virginia happened to be the first that acted on the recommendation, and being a member [of the Virginia Legislature], the only one of the attending commissioners at Annapolis who was so, my best exertions were used in promoting a compliance with it…