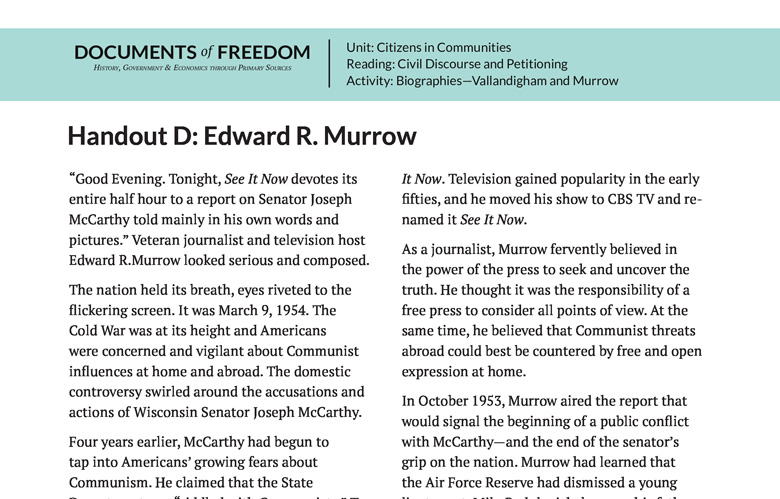 “Good Evening. Tonight, See It Now devotes its entire half hour to a report on Senator Joseph McCarthy told mainly in his own words and pictures.” Veteran journalist and television host Edward R. Murrow looked serious and composed.

The nation held its breath, eyes riveted to the flickering screen. It was March 9, 1954. The Cold War was at its height and Americans were concerned and vigilant about Communist influences at home and abroad. The domestic controversy swirled around the accusations and actions of Wisconsin Senator Joseph McCarthy.

Four years earlier, McCarthy had begun to tap into Americans’ growing fears about Communism. He claimed that the State Department was “riddled with Communists.” To prove it, he claimed to have a list of 205 names. As time went on, his finger-pointing continued. At every opportunity he blamed the deteriorating morality of America on suspected Communists.

Murrow was among those who thought that McCarthy should not have a one-sided debate. Nor should he be able to intimidate the American people. A veteran combat journalist, Murrow rose to fame with his riveting radio reports from Europe during World War II. His catchphrase “This is London . . .” could be heard over the sounds of bombs and air raid sirens. His report from Nazi concentration camps at the end of the war had moved many to tears. The public trusted his reporting.

After the war, Murrow returned to the United States, received two promotions, and, while covering the Korean War, began presenting weekly digests of news on the radio called Hear It Now. Television gained popularity in the early fifties, and he moved his show to CBS TV and renamed it See It Now.

As a journalist, Murrow fervently believed in the power of the press to seek and uncover the truth. He thought it was the responsibility of a free press to consider all points of view. At the same time, he believed that Communist threats abroad could best be countered by free and open expression at home.

In October 1953, Murrow aired the report that would signal the beginning of a public conflict with McCarthy—and the end of the senator’s grip on the nation. Murrow had learned that the Air Force Reserve had dismissed a young lieutenant, Milo Radulovich, because his father and sister were thought to hold “un-American views.” Yet no one accused Radulovich of having the same views. Authorities recommended that he condemn his father and sister in order to save his position. Radulovich refused. He declared that was not what it meant to be an American.

When Murrow aired the story on See It Now, he openly questioned the evidence for the charges. “Was it hearsay, rumor, gossip, slander, or was it hard ascertainable fact that could be backed by creditable witnesses? We do not know.” A public outcry followed, and Radulovich was given back his commission.

It was not long until Murrow learned that he himself would be the next object of McCarthy’s attack. The senator’s “evidence” that Murrow was “on the Soviet’s payroll” was that he worked during the 1930s as an advisor to the Institute of International Education, an organization that sponsored exchange seminars between American and Soviet professors. Murrow quickly responded.

Using the public forum most available to him, Murrow determined to tell the truth about McCarthy’s tactics, without condemning or slandering him. He wanted the public to consider what McCarthy had done and said, and come to their own conclusions. Over the next four months, Murrow and the See It Now staff organized audio and film clips for the show. Murrow told fellow CBS journalist Joseph Wershba, “The only thing that counts is the right to know, to speak, to think—that, and the sanctity of the courts. Otherwise it’s not America . . . we must not confuse dissent with disloyalty.”

Murrow explained the purpose of the show, “If none of us ever read a book that was ‘dangerous,’ nor had a friend who was ‘different,’ or never joined an organization that advocated ‘change,’ we would all be just the kind of people Joe McCarthy wants.” Consideration of other points of view was essential to Murrow’s belief in harmony and liberty. McCarthy would not consider his opponents’ viewpoints; Murrow considered them all.

As promised, the March 9 See It Now broadcast offered a portrait of Joseph McCarthy “in his own words and pictures.” Murrow offered the public reels of footage of McCarthy for their consideration: McCarthy mocking President Eisenhower, McCarthy insulting an army general, McCarthy challenging the integrity of his critics, and McCarthy telling half-truths.

Murrow concluded the show with these words, “We must not confuse dissent with disloyalty . . . We will not walk in fear, one of another. We will not be driven by fear into an age of unreason if we dig deep in our history and our doctrine, and remember that we are not descended from fearful men, not from men who feared to write, to speak, to associate and to defend causes which were for the moment unpopular . . . we cannot defend freedom abroad by deserting it at home.”

Following the broadcast, public opinion shifted sharply against the senator. Six days later, McCarthy demanded a chance to respond. Murrow and CBS agreed to a second broadcast. In his rebuttal, he referred to Murrow, among other things, as “the leader of the jackal pack” of his opponents. The appearance did little to restore public confidence. The senator’s hold on the nation’s fear and imagination was over. The spell was broken. Nine months later, the United States Senate censured Joseph McCarthy.

Murrow was not the only journalist who challenged McCarthy, but he is credited with skillfully using a new medium, television, so that the American people could consider the validity of McCarthy’s views. As Murrow later acknowledged, “The timing was right and the instrument was powerful. . . There was a great conspiracy of silence at the time. When there is such a conspiracy and somebody makes a loud noise, it attracts all the attention.”

Throughout his career, Murrow continued to report on newsworthy events, sharing contrasting points of view with the American public. He never assumed that he had all the answers. His report that March night demonstrated his ability to present the evidence and let the public consider all points of view—even those of Joseph McCarthy. As a fellow reporter commented when Murrow left CBS, “To whatever extent television has found its voice of conscience, purpose, and integrity, it was as much the doing of Edward R. Murrow as any other single individual in one medium.”