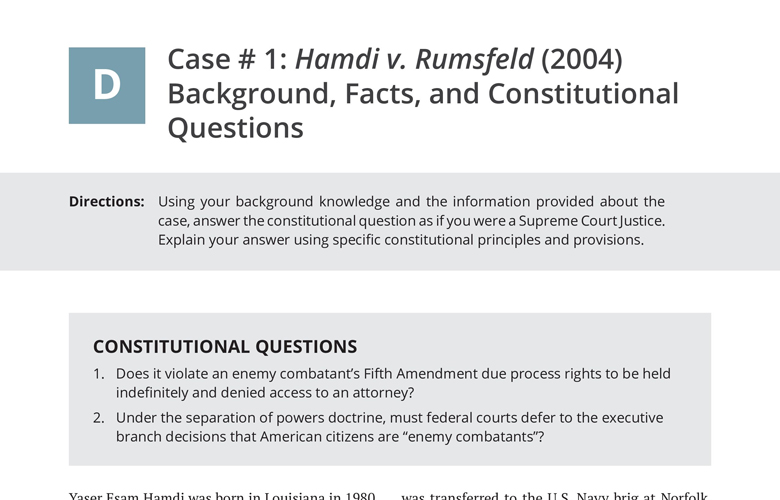 Yaser Esam Hamdi was born in Louisiana in 1980, the son of a Saudi oil company worker. When Hamdi was a toddler, his parents moved to Saudi Arabia, where Hamdi grew up. According to his father, Yaser traveled alone for the first time in the late summer of 2001 when he went to Afghanistan to do humanitarian relief work. According to U.S. military records, Hamdi then joined and received training from a Taliban unit that surrendered to the Afghan Northern Alliance in December of 2001. When Hamdi was taken captive on the battlefield, he was armed and allegedly supporting the Taliban against the United States. Classified an enemy combatant, he was transferred to the special U.S. detention facility at the U.S. Navy base in Guantanamo, Cuba. A few months after his arrival in Guantanamo, Hamdi, discovered to be a U.S. citizen, was transferred to the U.S. Navy brig at Norfolk, Virginia, and held in solitary confinement. After Hamdi’s father filed a petition for a writ of habeas corpus, several different courts considered Hamdi’s case. The U.S. Justice Department maintained that because Hamdi was captured in an active combat zone in a foreign country while aiding enemies of the U.S., he was an enemy combatant. Prosecutors insisted that the military, rather than a court, has the sole responsibility to wage war; battlefield judgments should not be challenged in courts. Hamdi’s father argued that the detention was unconstitutional because the government had violated the prisoner’s due process rights by holding him indefinitely, failing to bring charges against him, and denying him access to a lawyer or a trial.